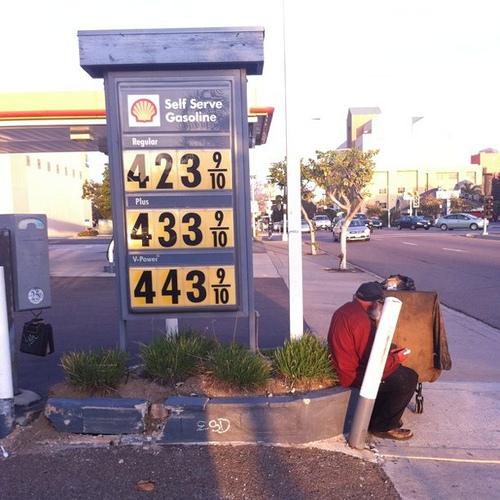 Instead of working for the American people, many lawmakers are shilling for Big Oil.
By Kate Colarulli | May 23, 2011

Over Memorial Day weekend, tens of millions of Americans will take road trips, emptying their wallets at the pump.

The oil industry hardly needs the boost this year. Just in the first quarter of 2011, oil companies posted billions of dollars in profits. They’re raking it in while working families are shelling out their earnings to pay at the pump. On top of those massive profits, the oil industry also benefits from tax breaks of $4 billion each year.

Adding insult to injury, lawmakers in the Senate have been unable to get the 60 votes they need to end these tax breaks. GOP leaders blocked altogether a recent attempt to bring up the issue for a vote in the House of Representatives. At a time when Americans are struggling to support their families, put food on the table, and fill up their gas tanks, giveaways to Big Oil make no sense.

As Congress continues to pass bills favorable to Big Oil — from accelerating the issue of off-shore drilling permits to shelling out oil industry tax breaks — we continue to see signs that our leaders are more interested in helping campaign contributors than average Americans.

According to the Center for Responsive Politics, House members who voted to continue oil subsidies received, on average, five times more money in 2010 from oil and gas interests. Instead of working for the American people, many of these members of Congress are shilling for Big Oil.

Public support for ending oil industry subsidies is overwhelming. A recent NBC/Wall Street Journal pollfound that 74 percent of voters support eliminating oil company tax breaks. It’s clear that we need leaders who will stand up to Big Oil and support the American people’s call to eliminate its tax loopholes.

We can’t afford the status quo. America’s leaders need to act immediately to break our nation’s dangerous dependence on oil and end the industry’s grip on our political system. We can begin by eliminating billions of dollars in tax giveaways to oil companies and using these funds to support transportation choices and deficit reduction.

It’s time to invest more in modern, clean, efficient vehicles and smart transportation. We need to build a modern transportation infrastructure, make cars that get at least 60 miles per gallon by 2025, and invest in electric cars.

Domestic manufacturing of these cars and trucks and a modern transportation network won’t only end our dependence on oil. It will also save consumers thousands of dollars at the pump, create good jobs here at home, and restore America’s manufacturing might.

We’re tired of the special interests calling the shots for Congress. It’s high time our leaders represented the interests of the people, not Big Oil.