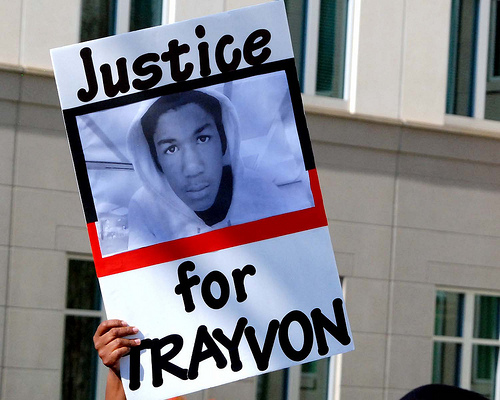 Why must we now teach our sons to defer to all potential bigots who come their way?
By Terrance Heath | July 17, 2013

Are you familiar with “Black Man 101”? Black men never get to graduate from this constantly changing and mandatory course in survival and behavior modification.

With the acquittal of Trayvon Martin’s killer, the Black Man 101 curriculum has been revised again.

The unarmed teen’s shooting made millions of African-American parents realize that any of our sons could be the next Trayvon Martin. His killer’s acquittal illustrates how the rules have changed once more, turning the clock back. 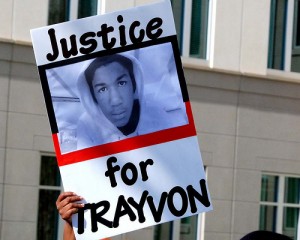 As a parent, I’m a Black Man 101 professor as well as a lifelong student. All parents of African-American sons must have “The Talk.” We know too well the stories of unarmed African-American men beaten, brutalized, and killed by the police. Their names haunt us, their faces loom in our minds, and we imagine our sons being in their sons’ places.

So we tell our sons that, as young black men, they’ll be held as suspects and sometimes treated as criminals, even if they’ve clearly done nothing wrong. We tell them how to conduct themselves in encounters with the police so that they may emerge alive and unscathed. We steel ourselves for the question that always follows: Why?

From the moment our children are born, all parents work hard to keep them safe. You want them to feel safe. But, the parents of black boys have to flip the script at some point. We explain to our kids that the world is not a safe place for them in ways that it is for other people.

Black Man 101 students once learned “Jim Crow etiquette.” Their lives depended on being agreeable and non-challenging with white people, even when whites were in the wrong. Under no circumstances were they to even appear to assume equality with whites.

The acquittal of Trayvon Martin’s killer harkens back to those old deferential rules.

We already teach our sons to be “agreeable” and “non-challenging” with police. Must we now teach our sons to conform to some modern form of “Jim Crow etiquette”? Just teaching our sons how to behave when stopped by the police no longer suffices. Just as in the bad old days of lynching, they have to behave a certain way when they are confronted by anyone vested with self-declared authority.

Why must we now teach our sons to defer to all potential bigots who come their way? Yes, those bigots may be armed and inclined to start shooting. But why?

Last fall, my oldest son got his first hoodie. The moment he put it on and pulled the hood over his head, I saw Trayvon Martin’s face. I saw my son in Trayvon’s place.

He’s old enough to have heard about Trayvon. That led to an early version of “The Talk.” At the end came the inevitable question: “Why?”

I held my son close. I told him that some people only see the color of his skin and what they choose to project on him because of it.

The answer is as heartbreaking to give as it is to receive. It’s the moment when a child’s safe world is permanently shattered.

Now, having been acquitted of killing Trayvon Martin, George Zimmerman not only has his freedom back, he’s got the gun he used to end that young man’s life.

As the father of two African-American boys, this is the stuff of nightmares. “The Talk” just got even harder to deliver. We not only have to tell our sons that they live in a world where the color of their skin makes them vulnerable. We have to tell them their killer could ultimately walk away a free man.

For our children, the world is neither safe nor just. That’s the ugly truth.

Terrance Heath is the online producer at Campaign for America’s Future. OurFuture.org
Distributed via OtherWords (OtherWords.org)