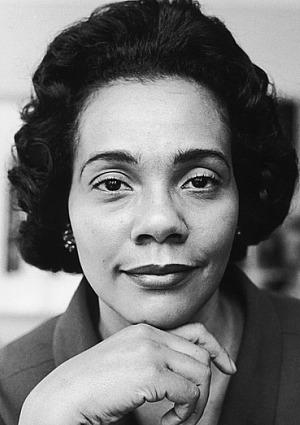 We celebrated Dr. Martin Luther King Jr.’s birthday in January, and now the country has moved into Black History Month. MLK left an enduring mark on our hearts and souls. But he was part of a team, and the other half of that team — his wife Coretta Scott King — made her own kind of history, with her husband and without him, both before and after his death.

Before her own death in 2006, King met many times with biographer Dr. Barbara Reynolds, one of the founding editors of USA Today and the only woman and African American on the paper’s editorial board. Of the time right after MLK’s assassination, Reynolds says this: “Most of the male civil rights leaders didn’t want to talk to me as a journalist, because they were afraid I would write something negative [about their desire to usurp King’s legacy]. But Mrs. King had nothing to hide — she opened her life to me.”

Coretta Scott King was a peace activist, an advocate for children, and a champion of the poor both before her marriage and long after her husband’s tragic death in 1968. But because she was also the wife of a great man, her own participation in the civil rights movement is often minimized. She put her life on the line every day, endured taunts and threats, and narrowly escaped death when the Kings’ house was bombed while she was home alone with their baby daughter. 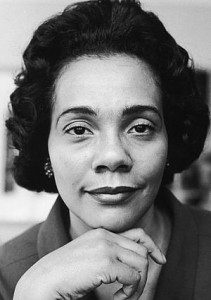 “What people don’t understand is that Mrs. King was in the line of fire,” says Reynolds. “She was the one who answered the phone when racist whites would call and say ‘I’m going to kill you.’ This aspect of her life is not part of her profile as a leader — but it said she could be trusted with trouble.”

After MLK’s death, Mrs. King, as she preferred to be called, traveled throughout the world speaking out on behalf of racial and economic equality, women’s and children’s rights, gay rights, and the needs of the poor.

Dr. King’s posthumous profile is much larger thanks to his wife’s tireless work preserving his memory. Through seemingly endless fundraising and advocacy, Coretta Scott King founded the Martin Luther King, Jr. Center for Nonviolent Social Change in Atlanta. It’s a memorial to the work they shared, and it houses the nation’s largest archive from the civil rights movement — an archive that exists in no small part because Coretta Scott King took notes, kept photos, and preserved documents throughout the struggle. She also spearheaded the 15-year education and lobbying campaign to establish her husband’s birthday as a national holiday, now celebrated by millions worldwide in over 100 countries.

Yet for all this, there’s no mention of Coretta Scott King at the recently dedicated memorial to Dr. King on the National Mall in Washington. “It is an outrage that Coretta is nowhere to be found,” says Reynolds. “Telling one story without the other creates a flaw and an imbalance — a scar on history.”

Coretta Scott King was far more than “the woman behind the man.” Never a mere appendage, she was an equal partner with Dr. Martin Luther King, Jr. throughout their lives. Her life and legacy with — and without — her husband, serve to remind us that black women make history too.

Martha Burk is a political psychologist, women's issues expert, and director of the Corporate Accountability Project for the National Council of Women's Organizations (NCWO). Follow her on twitter at @MarthaBurk and listen to an interview she conducted with Barbara Reynolds about Coretta Scott King at http://www.prx.org/pieces/73245.
Distributed via OtherWords (OtherWords.org)