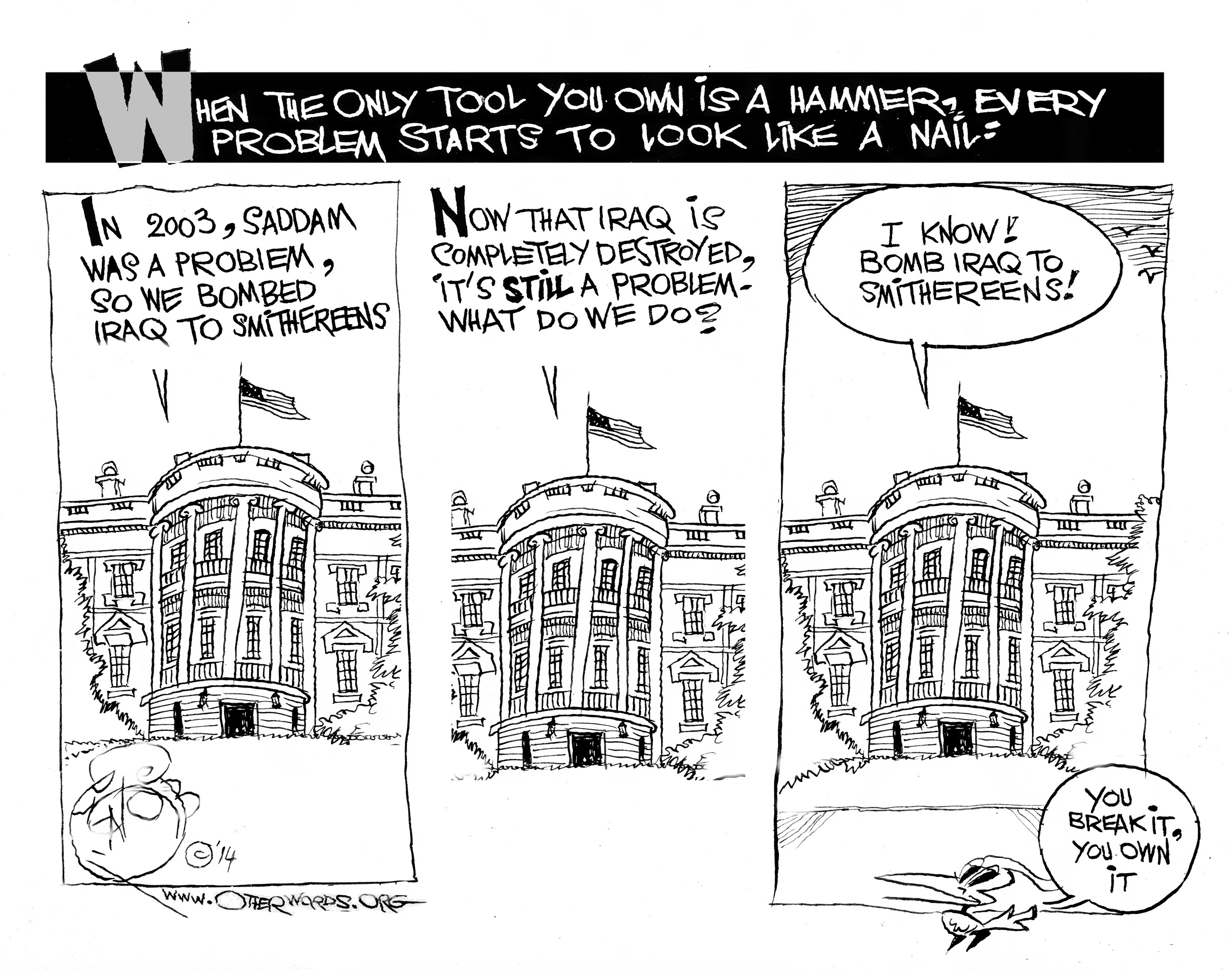 When All You've Got Is a Hammer, a cartoon by Khalil Bendib

Bombing at a Press Conference Beats Mindlessly Flexing Military Might

The latest conservative fad is beating up President Barack Obama for being too squeamish about exerting military force. The Republicans he defeated in 2008 and 2012 are prime examples. 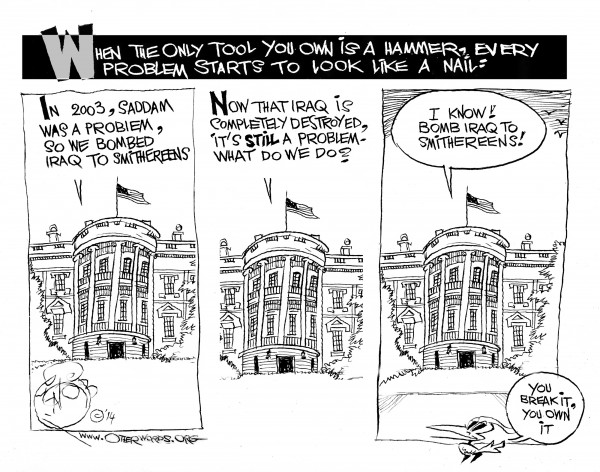 When All You’ve Got Is a Hammer, a cartoon by Khalil Bendib

Surely, there were better ways for Obama to explain why he wasn’t bombing everything in sight just to look decisive than his painfully honest words at a recent White House briefing. “We don’t have a strategy yet” for dealing with the Islamic State’s strongholds in Syria, he admitted.

Yet Obama wasted no time formulating a strategy, but not until after a U.S. strike killed Islamic militant leader Ahmed Abdi Godane in Somalia.

The White House’s about-face is coinciding with the release of a spike in public sentiment favoring intervention. A new poll found that 71 percent of Americans now favor military strikes on targets in Iraq, up from 54 percent just three weeks earlier.

Clearly, the nation’s military outlook is being redrawn faster than the quickest caricature.

Just a few months back, it really looked like the American people were no longer eager to wage wars. In January, a majority said the U.S. operations in Iraq and Afghanistan had “mostly failed,” a poll by the Pew Research Center and USA Today found. In February, Secretary of Defense Chuck Hagel announced force cuts that were supposed to make further U.S. invasions very unlikely.

Back then, military affairs seemed destined to consist of figuring out what to do with millions of suffering veterans and how to eventually stop squandering more trillions on the Pentagon. That doesn’t mean we haven’t been at war — even if you consider having nearly 32,000 U.S. troops still stationed in Afghanistan to not constitute a war.

The new U.S. methods of global domination are far cheaper as measured in American blood and treasure. Just like in the Star Wars movies, we have platoons of drones. These unmanned military aircraft, large and small, have killed thousands of people — some militants, yes, but more than a few civilians too — throughout Pakistan and Yemen, among other countries.

Where more muscle is required, that’s a job for Special Operations. These uber-troops sometimes undertake commando raids themselves, as seen in recent operations in Libya and Somalia. Mostly, they train elite squads of foreign officers to do the job on their own. In all, American Special Operations Forces are working with 134 different countries, or roughly 70 percent of the globe’s nations, Nick Turse reports.

Fewer boots don’t necessarily add up to a lighter global footprint. A military dependent on drones and special forces requires hundreds of overseas bases. By most reliable estimates, there are somewhere between 800 and 1,000 of them scattered about.

Even if they’re easier on the budget than full-out war, these operations come at a cost. Drone strikes and special ops hit jobs invariably get the United States involved in local conflicts all over the world, making enemies out of people whose fight was originally with someone else.

Obama should keep that in mind as he hones his new strategy for responding to the emergence of the Islamic State.

The hottest conflicts raging at the moment don’t come with easy answers. What could go wrong if Washington sides actively with Ukraine against Russia? (Plenty.) Or if the Pentagon were to give the Syrian opposition more weapons? (Answer: It could add to the Islamic State’s stockpile of American-made weapons.)

And what if we were to try to “help” Libya and Iraq some more? Recent U.S. interventions in those countries produced the exact opposite of peace and security.

Whether or not the Obama administration’s shiny new strategy gets its conservative critics to lower their volume, there are no easy answers to these questions.