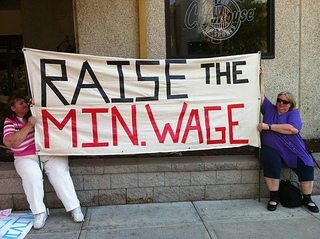 Boosting the Economy from the Bottom Up

It's time to raise the minimum wage and peg it to inflation.
By Marc Morial | June 5, 2013

During his State of the Union Address, President Barack Obama put a face on the growing chasm between the “haves” and “have nots” with a modest proposal to raise the minimum wage to $9 an hour by 2015, and index it to inflation thereafter.

“Let’s declare that in the wealthiest nation on Earth, no one who works full-time should have to live in poverty,” Obama said. “This single step would raise the incomes of millions of working families. It could mean the difference between groceries or the food bank; rent or eviction; scraping by or finally getting ahead. For businesses across the country, it would mean customers with more money in their pockets.”

In March, two Democrats — Senator Tom Harkin of Iowa and Representative George Miller of California — upped the ante by introducing the Fair Minimum Wage Act of 2013. This bill would take the federal minimum wage to $10.10, index it to inflation, and also gradually elevate the minimum wage for tipped workers — which currently stands at just $2.13 an hour — for the first time in more than 20 years, to 70 percent of the regular minimum wage.

The National Urban League wholeheartedly supports the Harkin-Miller bill. If it becomes law, 30 million people would get a raise, more than half of whom would be people of color.

A growing group of supporters stands with us, including U.S. Women’s Chamber of Commerce CEO Margot Dorfman.

“Raising the minimum wage puts dollars in the pockets of people who are by necessity most likely to spend them immediately at the grocery store, the childcare provider, the auto-repair shop and other local businesses,” Dorfman said. “Raising the minimum wage boosts the economy from the bottom up, which is exactly what we need to repower our economy and create lasting jobs.”

I agree. It’s time to put partisan politics aside and do what’s right for the working poor and for our economy. Raise the minimum wage now.