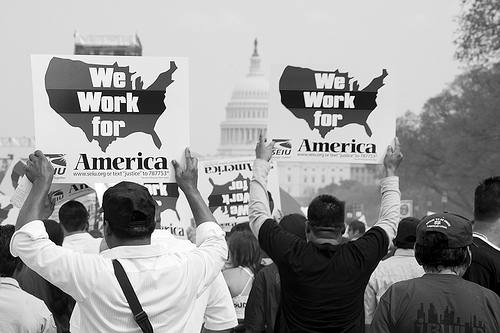 Building an Underclass of Workers

Journalists should report on the consequences of immigration reform without citizenship.
By Jason Salzman | July 24, 2013

You’ve probably heard that America has millions of undocumented immigrants. Maybe one of them lives next door to you. Or there’s one lurking on your roof. Or another lying nearby on the beach.

My kids go to school with undocumented immigrants. They play on the same soccer teams. We bump into their parents at the grocery store. 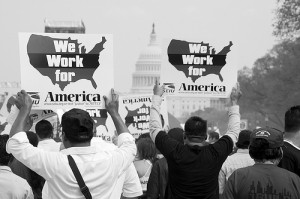 Congress is debating whether these people, who number over 11 million in our country, should be granted a “path to citizenship” as part of overarching legislation to reform the U.S. immigration system.

Everyone agrees that America’s immigration system needs fixing. The sticking point is whether immigrants should eventually be able to earn the right to be called Americans. My own “illegal-immigrant” in-laws did just that by paying fines, passing background checks, and taking tests, among other things.

Republicans in the House of Representatives want to pass a bill without a path to citizenship. Those lawmakers want to focus on border security first and possibly citizenship later. It could wind up being citizenship never.

Lost in the media coverage of this debate is what life would look like for immigrants if America doesn’t offer citizenship to the immigrants who’ve become part of our country.

Presumably, our country instead would grant work permits. That would bring our immigrant neighbors out of the shadows, but not as equal partners.

We’d create a working underclass that, the way I see it, is about as un-American as it gets.

It wouldn’t be straight-up slavery or indentured servitude. Neither would it be Jim Crow America.

It would be closer to the relationship between South Africa and the country of Lesotho post-apartheid, when the Lesotho miners would go to South Africa to live and work but not become South Africans.

The closest model might, ironically enough, be the colonists, whose complaint of taxation without representation would apply once again.

The picture of millions of “legal” immigrants with no voting rights gets ugly when you start thinking about it in the context of those pesky American values like democracy.

Or maybe not. Maybe this is what 21st-Century American opportunity looks like for Republicans who oppose the path to citizenship. Maybe mere legal status is sufficient for them.

If so, fair enough. But journalists who write that House Republicans oppose a path to citizenship should flip their perspective and also report that GOP opponents favor the official creation of an underclass of American workers. Let’s hear more from reporters about the GOP vision of what America looks like with a class of pseudo-citizens who are fundamentally unequal to the rest of us.