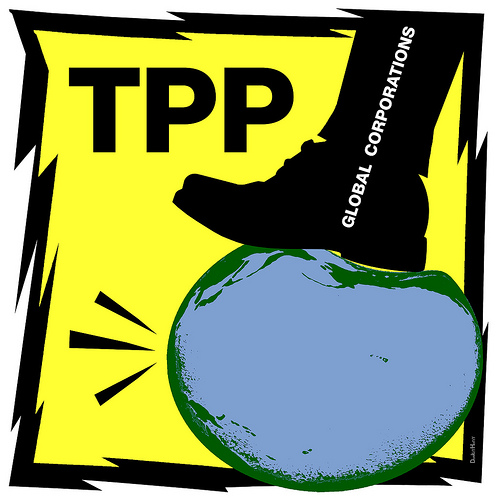 These deals endanger our democracy.
By Ron Carver | December 4, 2013

That numbing spoonful of alphabet soup represents four so-called free trade pacts that benefit global capital at the expense of everyone else. 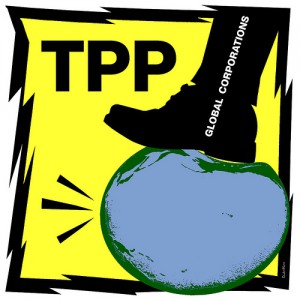 The Trans-Pacific Partnership (TPP) and the Transatlantic Trade and Investment Partnership (TTIP) are in the works now. President Barack Obama wants Congress to grant him “fast track” authority to expedite these deals.

Thanks to firm opposition by progressive and tea-partying activists and legislative gridlock, it’s looking like his administration won’t get this power.

Are you one of the hundreds of thousands of manufacturing workers who lost their jobs when U.S. factories moved to Mexico or China? If so, you’re probably more aware of these deals than most Americans.

But all of us should care. You may not believe trade agreements affect you — but they do, profoundly. They also endanger our democracy.

A few cases making their way through shadowy World Bank and UN tribunals should help everyone see what’s dangerous about these deals.

Do you care about the environment and clean water? El Salvador did, and instituted a moratorium on new mining operations after a popular uproar. People there are living with the consequences of gold mining, including the contamination of more than 90 percent of El Salvador’s surface water by cyanide and arsenic.

However, citing the CAFTA-DR trade agreement, a Canadian mining company called Pacific Rim Mining Corporation brought a case before the World Bank’s “investor-state” tribunal. Pacific Rim claims El Salvador has no right to restrict mining on its own soil or to require that disputes be resolved in its own courts.

Never mind that the proposed mine is located by a river supplying two-thirds of El Salvador with drinking water. Or that Canada wasn’t even a party to the CAFTA-DR accord. Pacific Rim simply moved its Cayman Islands office to Reno, Nevada. Then, it declared it had jurisdiction under that pact. When that ploy failed, Pacific Rim cited an obsolete law that has since been rejected and replaced.

Philip Morris took a similarly low road when it tried to stop Australia from requiring tobacco companies to sell cigarettes in plain brown paper packages — minus the cowboys and camels.

After unearthing an old Australian accord with Hong Kong that allows dispute resolution before tribunals, the tobacco titan shifted some investments to Hong Kong. Then it claimed to be an investor there and filed a complaint through its Hong Kong office.

Phillip Morris is now trying to force Australia to abandon its public health initiative or pony up billions to cover the loss of future profits.

Even U.S. regulations are vulnerable. Apotex, a Canadian drug manufacturer, is suing the United States government for $520 million. Why? FDA inspectors temporarily cut off the company’s U.S.-bound exports a few years ago due to manufacturing woes. Apotex now claims that enforcing U.S. drug safety regulations threatens its potential profits and violates NAFTA’s terms.

How can this be?

Our leaders sell trade deals to the public as a means of building our economy by boosting exports. They don’t talk about big business’s desire to topple national regulations and laws that protect public health, labor rights, and the environment.

That’s because the negotiations are held in secret.

Well, they aren’t entirely secret. The corporations who benefit are invited to participate. After Congress made a stink, its members were finally briefed on the ongoing talks as long as they promise not to divulge anything.

The rest of us are kept in the dark.

And those fast-track votes Obama wants on the TPP and TIPP? They’d deny Congress a chance to add or delete provisions along the lines of the ones companies are using to challenge consumer-protecting laws in El Salvador, Australia, and right here in the United States.