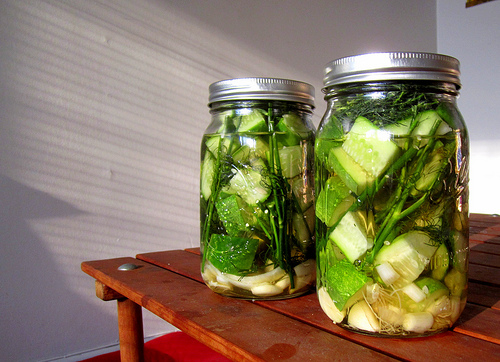 When I arrived to help my friends Tom and Terri with their garden, they eagerly showed me a 10-pound zucchini.

“I just wanted to see how big it would get,” Tom said, explaining why he didn’t pick it when it was smaller. “Do you want it?”

“I can think of some people I want to hit over the head with it,” replied Terri. “I’m not going to make zucchini bread. Besides, we have all of these.” She gestured at a small pile of normal-sized zucchinis they grew. And still more were growing. 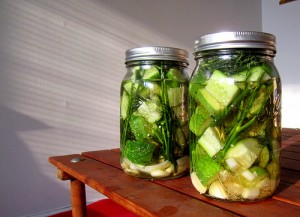 Too Much Zucchini syndrome is well known among gardeners. There’s even an official “Sneak Some Zucchini onto Your Neighbor’s Porch” day — August 8. In Tom’s garden, the excess isn’t limited to zucchini. There are the runaway cucumber plants that grow enough to feed a small army, and then there are the tomatoes.

Nowadays, most of us buy what we need from the store when we need it, so the problem of growing too much produce is unfamiliar. Those of us who are participating in the resurgence of gardening are magically transported back to the annual rhythms of an earlier time.

For us, summer is for growing food and saving it to be eaten over the winter.

This way, you eat fresh fruits and veggies when they are at the peak of ripeness, and you can continue to enjoy them pickled, fermented, dehydrated, canned, or frozen throughout the year.

I took the plunge and began canning a few years ago when I found a farmer selling overripe strawberries for $1 per pint. What a deal! They were too plentiful to eat fresh before they spoiled, but they were ideal for jam.

And you know what? There’s no mystery to making jam. The recipe usually involves fruit, sugar, maybe lemon juice or pectin, and nothing else unless you feel like getting creative. (This year, I made vanilla cardamom blackberry jam.)

Since my first jam-making adventure, I’ve often invited friends over to see how it’s done. They arrive expecting some elaborate process. After we ladle boiling jam into hot jars and submerge them in boiling water for a set period of time (around 15 minutes), my friends always ask, “That’s it?”

Yep, that’s all there is to it. It ain’t rocket science.

My annual routine includes an epic tomato sauce-canning weekend each summer. It’s a pain to scout farmers’ markets until I can find a good deal on 80 pounds of overripe tomatoes and then drop everything to cook for the next two days. Yet it’s so worth it all year long.

By slowly cooking the sauce on the lowest setting for an entire day, I achieve an amazing, sweet roasted flavor. My secret ingredient is a splash of apple cider vinegar. Once the sauce is put away, I’ve got a whole year of easy, homemade pastas and pizzas ready to go. You can’t buy sauce that tastes this good.

Turning cabbage into sauerkraut doesn’t just preserve it — it turns it into a probiotic superfood. Fermentation can break down chemicals that interfere with absorbing nutrients, make nutrients more available to your body, and provide your gut with beneficial microbes.

Our ancestors lived without refrigerators, so they put up food because they had to. Even in a modern world of grocery stores and global markets, sometimes the best-tasting and healthiest choices are still the ones you grow and preserve yourself.

What about zucchini? You can’t turn it into jam or pickles. But you can grate it and toss the stuff into pasta, where it melts away. Or make zucchini bread. Or sauté sliced zucchini in olive oil, sea salt, and dill. Or put little chunks of it in soups.

To preserve zucchini, slice it, blanch it for three minutes in boiling water, and stick it in your freezer.

That mammoth 10-pounder? I made three batches of zucchini bread and five meals out of it. There’s a bit more left in my fridge. Want some?