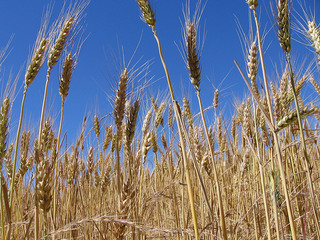 Frankenwheat crops are sprouting like weeds in Oregon.
By Jim Hightower | June 12, 2013

Bob Dylan once sent a two-word lyric to Ben Harper, a talented songwriter he admired. “Well well,” was the lyric, and Dylan challenged Harper to make a song of it.

He did! By adding another “well” to the title, Harper wrote “Well, well, well” — a stinging lament about America’s clean-water well going dry due to waste and greed.

I thought of his song when I heard that a wheat farmer in Eastern Oregon had gotten an unpleasant surprise in May: Some of Monsanto’s unapproved, genetically manipulated wheat suddenly cropped up in his field. He’d never planted any of these Frankenseeds, which have a foreign DNA spliced into them by Monsanto’s bio-tamperers.

Field tests of the altered wheat were last done in Oregon in 2001, and the seeds never have been cleared for commercial use anywhere in the world. But there they are, sprouting like weeds.

Well, well, well. Ever since Monsanto, backed by its political protectors, began messing with the very DNA of our food supply two decades ago, the company line was that it was all perfectly safe and under tight control.

Farmers, however, warned that these corporate and political powers were a bunch of profiteering ignoramuses who knew nothing about such basic realities as pollen drift. Pollen from mutant plants can — and does — move many hundreds of miles across state and national borders to contaminate the crops of unsuspecting farmers living far away.

Ninety percent of the wheat grown by Oregon farmers is exported to Japan and other nations that don’t let their consumers serve as lab rats for agribusiness hucksters. So the escape of Monsanto’s wheat into the wild endangers both wheat exports and the purity of organic corps — along with human health and our environment.