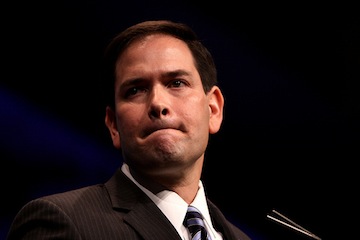 Marco Rubio has unmasked himself as an opportunist whose most consistent commitment is to his own ambition.
By Raul A. Reyes | November 6, 2013

This was supposed to be Marco Rubio’s big year. Back in February, the junior senator from Florida made the cover of Time magazine — billed as “The Republican Savior.”

The supposedly rising star was proclaiming himself ready to lead on the thorny issue of immigration. Rubio’s name was often mentioned as a 2016 Republican presidential candidate. Now conservatives and liberals alike are disappointed in him. What happened?

The real Rubio stood up.

Instead of being ready to lead on immigration, he’s running away from it. He’s shown that he’s not a team player. The GOP’s former golden boy has unmasked himself as an opportunist whose most consistent commitment is to his own ambition.

Don’t feel bad if you’re not sure what Rubio’s position on immigration reform is, because that changes a lot. In January, he criticized President Barack Obama for doing “absolutely nothing” on immigration. Two months later, he warned fellow senators not to rush immigration legislation.

Although he was a member of the bipartisan Senate “Gang of Eight” that unveiled a comprehensive immigration plan in June, which includes a path to citizenship for undocumented immigrants, Rubio has since abandoned that proposal.

Really. Rubio doesn’t support his own bill anymore. He has also discouraged House Republicans from negotiating with the Senate or passing their own immigration measure. While Rubio’s spokesman says it’s important to be “realistic” about comprehensive reform, even conservatives are confused by all this flip-flopping.

“I’m not sure it has ever happened before that an architect of major legislation in the Senate has basically opposed its passage in the House,” National Review editor Rich Lowry wrote. “But that’s where Marco Rubio is.”

The Florida Republican must not realize that he is pursuing a doomed strategy. Sen. John McCain (R-AZ) was a moderate on immigration until he ran for president. Then he veered to the right, which helped him win the GOP nomination but ensured his loss to Obama in 2008.

Likewise, Mitt Romney distanced himself from his successful Massachusetts health care plan, pandering to the tea-partying conservative zealots. We all know how that turned out. The takeaway from these stories is that elections are won in the middle, not on the far-right fringe. So it’s unwise for Rubio to back off his signature issue so swiftly.

Incredibly, Rubio has begun to accuse Obama of stalling on immigration. Rubio told Fox News Sunday that the president has “undermined” efforts at reform “because of the way he has behaved” during the recent government shutdown and debt ceiling talks. What? Rubio ignores the fact that his party created both of these pointless crises.

If immigration reform fails, everybody loses. The nonpartisan Congressional Budget Office (CBO) has estimated that the Senate immigration plan would potentially halve undocumented immigration while shaving $200 billion from the budget deficit within a decade. It would create even more savings after that.

Overhauling our immigration laws would create an opportunity for millions of undocumented immigrants to come out of the shadows, which would bolster national security. It would allow the GOP to improve its dismal standing among Latino voters. Rubio has jeopardized all that because he’s fretting about his political future.

True, Rubio’s earlier support for reform has led to declines in his national popularity numbers as well as his standing in early voting states like New Hampshire. Yet political glory does not come without risks. A mature leader stays the course when the going gets tough.

It’s bad enough that House Speaker John Boehner won’t allow a vote on the Senate immigration plan, which has support from at least 29 House Republicans. By backpedaling at such a critical juncture, Rubio has probably doomed near-term passage of a comprehensive reform law.

Immigration reform advocates vow that they won’t give up. If only the same could be said about Rubio. He had a chance to lead on immigration and he blew it. Sadly, these days the Republican “savior” is looking more like a Republican failure.