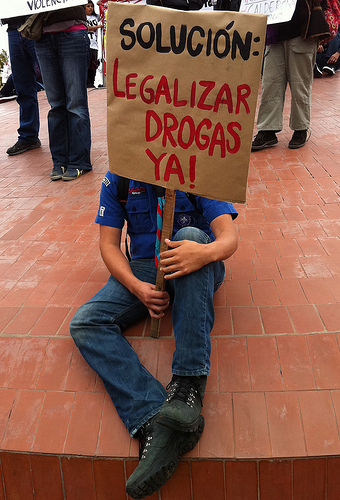 After 40 years of failing to stem the drug trade, there's a global conversation about new approaches.
By Jess Hunter-Bowman | May 29, 2013

As Manuel, a Colombian farmer, showed me his peppercorn crops ravaged by the defoliant sprayed in a futile effort to kill his neighbor’s drug crops, he explained why the Drug War could never be won. No matter how much money or chemicals drug warriors threw at eradication efforts, he told me, the crops always reappeared.

After 40 years of failing to stem the drug trade, there’s a global conversation about new approaches. That debate is particularly vibrant south of the Rio Grande.

“Human rights abuses in the war on drugs are widespread and systematic,” wrote former Brazilian President Fernando Henrique Cardoso, in a recent New York Times op-ed. “A systemic problem demands systemic change…it is time for the human rights movement to take a leading role in calling for an end to the war on drugs.”

Even Guatemala’s hard-line president has called for regulating instead of outlawing drugs as an option to deal with the scourge of the drug trade. “The struggle against drugs, in the way it has been conducted, has failed,” said Otto Pérez Molina, who served as the head of military intelligence during that country’s brutal civil war. “There is going to be a change away from the paradigm of prohibitionism and the war against drugs.”

And that’s exactly what is happening across the hemisphere.

Uruguay is in the final stages of passing legislation that make way for a fully regulated and legal marijuana market. And even our government’s closest Drug War partners, Colombia and Mexico, have signaled their openness to new approaches.

The Organization of American States has just released an unprecedented report on drug policy calling for a dramatic departure from the status quo. While the report stops just short of calling for decriminalizing marijuana, it endorses national experiments with new regulation and decriminalization approaches.

When this report came out, OAS Secretary General José Miguel Insulza took dead aim at Washington’s approach to drug control, particularly our addiction to imprisoning nonviolent drug offenders. He echoed one of the report’s central findings: that drug abusers should be treated by medical professionals rather than sent to prison for drug possession.

“We do not consider that sending serious addicts to prison is an appropriate treatment,” Insulza said. “Indeed, we think it can aggravate their condition even beyond the point of no return.”

And despite voters in states across the country approving medical marijuana with some even fully decriminalizing the drug, the federal government fights tooth and nail at every turn to hold back the changing tide. Our federal budget includes $24.5 billion for the fight on drugs this year, with 58 percent of that spent on law enforcement and the international war on drugs. Add to that the billions spent by cities, states and counties on law enforcement and it’s easy to see how we’ve spent over $1 trillion on the futile Drug War over the past four decades.

Our government’s approach to drug policy — treating it as question of criminal justice at home and a military challenge abroad — has left deep scars across the Americas.

Millions across our country struggle to find work because of the stigma of being a convicted felon, having served time for a nonviolent drug offense. Nearly 100,000 people have been killed in Mexico’s U.S.-backed drug war with little to no impact on drug trafficking. Colombian farmers like Manuel have seen their farms and surrounding forests destroyed after spray planes dumped defoliant in the heart of the Amazon basin.

That’s why we should warmly welcome the new ideas emerging in the drug policy debate that leave behind the ineffective and inhumane approaches so entrenched in Washington.

Jess Hunter-Bowman is Associate Director of Witness for Peace, a nonprofit organization with a 30-year history analyzing U.S. economic and military policy in Latin America. WitnessforPeace.org
Distributed via OtherWords. (OtherWords.org)