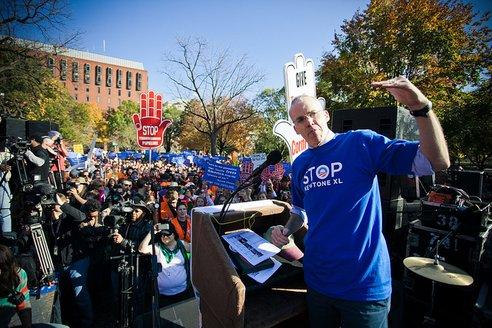 Big Oil will do everything it can to overturn President Barack Obama's decision and build the Keystone XL pipeline.
By Michael Brune, Bill McKibben | January 23, 2012

We cheered when the Obama administration formally denied a federal permit for the proposed Keystone XL tar sands pipeline put forth by Canadian oil giant TransCanada. The 1,700-mile pipeline would have run through six states, carrying toxic, highly corrosive tar sands crude from Alberta, Canada, to refineries and ports in Texas.

The move marks a decisive victory for Americans who want clean air to breathe and safe water to drink, and all Americans who want to stop climate disruption. Yet although the decision represents another down payment on the White House’s commitment to move our country beyond oil, we know that Big Oil and its cronies in Congress won’t give up their endless pursuit of profits at the cost of Americans’ health and prosperity.

Big Oil will do everything it can to overturn President Barack Obama’s decision and build this pipeline. That includes bringing to bear an army of lobbyists, a multi-million-dollar public relations blitz, and all the politicians money can buy. Now the industry is calling in the $12 million worth of political favors it has bought in Congress to get its dirty work done. 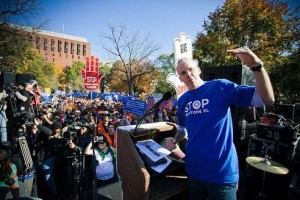 This is why we must continue our fight against dirty tar sands oil and why we must continue banging the drum of clean energy. Investing in clean energy boosts the economy and creates real, productive jobs. We don’t want jobs that destroy our air and water. And we don’t want energy sources that not only pollute our air and water, but our democracy itself.

Our fight must continue. What hundreds of thousands of Americans have done these past eight months is quite amazing — and against all odds. Thanks to the hundreds of thousands of Americans from all 50 states and the District of Columbia who got arrested, signed petitions, attended rallies, encircled the White House, called their lawmakers, filed comments, and spoke up, we’ve shown that spirited people can bring science back to the fore. But we’ve won no permanent victory. Environmentalists rarely do.

Blocking one pipeline was never going to stop climate disruption. But it’s a real start. For one of the first times in the two-decade fight over climate change, the fossil fuel lobby has actually lost.

We need to break our addiction to oil, and we need to get oil companies out of our politics. It’s time to shut off the flow of handouts to the oil, gas, and coal industries, and to take away their right to use the atmosphere as an open sewer to dump their carbon in for free.

Rest assured, Big Oil and its cronies will bring everything they have to this fight — their world-record profits depend on it. We’d better fight just as hard, because the world itself depends on it.

Make no mistake — this was a brave decision by the Obama administration. We thank the president for listening to the concerns of American farmers, landowners, and other people who care about clean air, clean water, and a stable climate.

Bill McKibben is the co-founder and board chairman of 350.org, an international climate campaign that works in 188 countries. www.350.org
Michael Brune is the executive director of the Sierra Club, the largest grassroots environmental organization in the United States. www.sierraclub.org
Both are leaders in a multi-year campaign to stop the construction of the Keystone XL pipeline and halt the development of tar sands and other "extreme" energy sources.
Distributed via OtherWords (OtherWords.org)