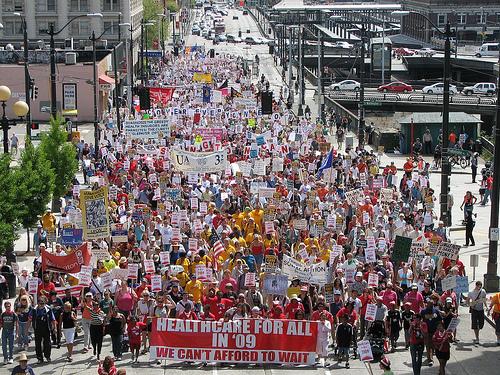 Chugging Down the Wrong Track

The nation's sick health care system is killing too many Americans.
By William A. Collins | May 30, 2011

Health insurers,
Mighty slick;
Turn me down,
When I get sick

Most nations use health care to maximize the well being of their citizens. A few use it to maximize corporate profit. The United States is among the latter.

Our pharmaceutical firms and health insurers are the envy of the global industry for their ability to bend government and its regulations to their advantage. Many hospitals have also found a formula for making money, at least for top staff and specialists. Medical equipment manufacturers are getting along swimmingly too.

Some patients are still surviving quite nicely under our strange insurance system. Unfortunately, their number is shrinking as all those various profit centers drive up the cost of care so that millions of plain folks can’t afford it. Many employers, our traditional insurance sponsors, are cutting their losses by slashing workforces and the breadth of services they cover. You can hardly blame them.

Other nations do a better job. Most have some form of universal care, government-run or otherwise. These systems cover everyone from birth and one way or another start collecting premiums, often in the form of taxes, as soon as people start to work. To a large degree, such systems approximate what we already do with Medicare and Social Security.

The genius, or maybe just common sense, of all these schemes is that everyone pays into the pool while they’re young and healthy, thus providing the funds to cover treating the old and the sick. That is simply the way insurance is supposed to work.

This system’s other facet of genius is that these nations use only one insurance company, generally run by the government. Such a plan, emulating Medicare, cuts out obscene corporate profits and executive compensation. It also ends the unconscionable duplication of staffs and rules that drive doctors crazy. Further, it ceases the pointless squandering of premiums on advertising, marketing, lobbying, and trickery that aim to persuade customers to choose one company over another.

Such an arrangement, where government becomes the only insurer, is unglamorously called “single payer.” It’s not easy lingo to fit into a jingle, or even to explain. Nonetheless, after our long, costly, and destructive experiment with the current corporate system, it’s clear that a single-payer health care system is the only affordable way to go.

Hence it was profoundly unhelpful of President Barack Obama to refuse even to put it on the table during his excruciating, drawn-out roundtable that supposedly brought all health players under the same tent to find a solution. It didn’t. A single-payer health care system was ignored. And while the Affordable Care Act does include some needed reforms, the likelihood is that the president’s whole convoluted structure will eventually collapse, in part because of relentless GOP attacks.

Optimists foresee that this collapse will be so devastating that it will finally drive the nation to a single-payer solution after all. Too bad about the legions of patients who will die for want of adequate care in the meantime. Still, let’s hope that the optimists prove right, and soon. The nation’s sick health care system is killing too many Americans.