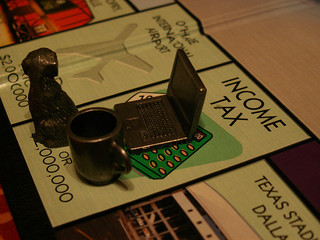 America's super-rich once felt sure their incomes would never be taxed.
By Sam Pizzigati | October 2, 2013

A hundred years ago, on October 3, 1913, President Woodrow Wilson signed into law the first modern federal tax on income.

John Buenker has been writing about the events that led to that signing for a good bit of the last 50 years. His 1985 book, The Income Tax and the Progressive Era, remains our most insightful history of the years of struggle that led to federal income taxation.

That history clearly matters to Buenker, an emeritus historian at the University of Wisconsin-Parkside. But should this history also matter to the rest of us?

Actually, the early history of the income tax may matter more today than ever before. In 2013, after all, Americans face almost the same challenge our counterparts in 1913 faced. They lived amid a staggeringly intense concentration of wealth and income. We do too.

America’s wealthy a century ago enjoyed nearly a lockgrip over the nation’s politics. One example: U.S. senators back then never had to stand before voters. State legislatures, not average Americans, decided who served in the Senate, and the lawmakers who filled these legislatures often considered giant corporations their only constituents who mattered.

And should legislation hostile to plutocratic interests somehow slip into law, the U.S. Supreme Court stood ready to rescue the nation’s most comfortable. In 1894, with the West and South aflame in Populist revolt, Congress passed a modest tax on high incomes. The Supreme Court the next year declared the tax unconstitutional.

Americans of modest means, despite this stacked political deck, would eventually prevail in the battle for an income tax. Growing economic hardship, historian John Buenker believes, certainly played a key role in the victory. A depression in the 1890s, followed by sharp inflation and then a financial panic in 1907, all nurtured growing public unease over the political power America’s rich exercised.

But this growing unease, Buenker stresses, only translated into an income tax because citizen activists had spent decades on the “frustrating, brutal, and boring work” of building a movement committed to taxing the rich.

“They kept grinding away against all that wealth and power,” as Buenker told me recently. “They refused to give up, no matter how many barriers their opponents threw in their path.”

The last major barrier went up in 1909. Income tax advocates in Congress finally appeared to have enough votes to put an income tax into law. Instead, a series of cynical congressional leadership deals produced a prospective constitutional amendment that only gave Congress the authority to consider an income tax.

Conservatives felt sure this amendment would never be ratified. But in 1910 and again in 1912, progressives mobilized to elect pro-income tax legislative majorities in state after state. In early 1913, the amendment allowing an income tax became part of the Constitution, and Congress would soon send President Wilson an income tax bill.

This first income tax statute wouldn’t be much more than a nuisance for America’s rich — no dollar of income faced more than 7 cents in tax — but tax rates on high incomes would rise significantly in the years to come.

By mid-century, notes Buenker, the income tax had become an “effective tool for dealing with the obscene maldistribution of income and wealth.” By 1944, the tax rate on income over $200,000 had jumped to 94 percent, and the nation’s top tax rate would hover around 90 percent for the next two decades. Those were years of unprecedented middle class prosperity.

Given the conservative counterattack against the income tax of recent decades — the top tax rate today stands at 39.6 percent — what would Buenker do differently if he were writing his 1985 tax history today?

“I would go into much more depth,” he notes, “on the dynamics and mechanics of building the multifaceted, nationwide coalition that brought the income tax into effect.”

The lesson from that coalition? Achieving success against concentrated wealth, says Buenker, “takes persistence over a long period of time.”