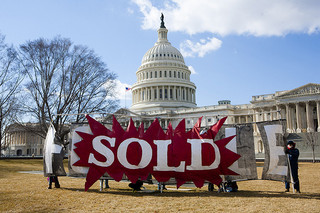 With its ruling in McCutcheon v. Federal Election Commission, the Supreme Court could deepen the damage it has already done to our campaign finance laws.
By Marge Baker | September 25, 2013

Did you get sick of that barrage of attack ads during last year’s elections? Brace yourself: It could get worse. One deep-pocketed Alabama donor named Shaun McCutcheon, joined by the Republican National Committee, will soon ask the Supreme Court to let him put even more money directly into political campaigns.

That’s not what our country needs.

McCutcheon v. Federal Election Commission will target aggregate contribution limits — caps on the total amount a person can give directly to candidates, PACs, and parties in each election cycle. For the upcoming election cycle, that limit is roughly $123,000. Given that this cap is more than double the median household income in our country, this restriction clearly affects few Americans.

Haven’t we seen this movie before? In 2010, the Supreme Court ruled in Citizens United v. FEC that corporations can spend unlimited amounts of money influencing elections, as long as they spend it independently of candidates and parties. 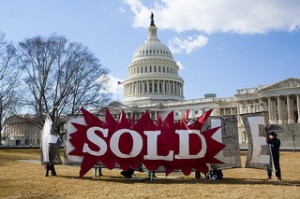 That ruling, which flew in the face of legal precedent and exacerbated a political system already dominated by moneyed interests, was deeply unpopular with Americans of all political stripes. With McCutcheon, the attack on our democracy continues — this time through a potential gutting of one of the last remaining pillars of our campaign finance legal structure, aggregate campaign contribution limits.

One interesting thing about this case is that the high court has already written about these limits. In its 1976 decision in Buckley v. Valeo, the Supreme Court ruled that the aggregate limits were “no more than a corollary of the basic individual contribution limitation” and found them to be constitutional. That was nearly four decades ago, but the principle remains the same.

For example, aggregate limits prevent wealthy special interests from funneling money to candidates to whom they have already maxed out in direct contributions. If a donor couldn’t give more to Candidate A, for instance, he or she could just write checks to a joint fundraising committee, knowing that the individual party committees could then funnel the money back to one particular party committee that works entirely to support a single candidate — all without running afoul of the law.

The effect would be that the richest donors could pass tens or hundreds of thousands of dollars to support a single lucky candidate. And when big donors can find ways to give eye-popping sums of money to candidates, the potential for corruption is clear. As the lower court whose decision is being reviewed by the Supreme Court noted: “The candidate who knows the coordinated expenditure funding derived from that single large check at the joint fundraising event will know precisely where to lay the wreath of gratitude.”

You’d be hard-pressed to find many Americans pining to see even more big money flowing into our political system. What Americans do want are commonsense campaign finance rules. We want our voices and our votes to matter. This is why support for pro-voter reforms is growing across the country.

Sixteen states and more than 500 towns and cities, including Los Angeles and New York, have gone on record in support of a constitutional amendment to undo Citizens United and related decisions. And, in many states, Americans are resisting draconian voter suppression bills that disproportionately affect people of color, the poor, and students, such as the many hundreds of people raising their voices in North Carolina’s Moral Monday protests. The message in all of these actions is clear: Everyone’s voice should be sacred in our democracy, no matter their age, race, or the number of zeros on their paycheck.

So on October 8, when the McCutcheon case is argued at the Supreme Court, I’ll be there — with hundreds of friends and allies. We’ll stand on the steps of our country’s highest court, asking the justices within to protect the integrity of our democracy. We’ll ask them to protect the voices and votes of “We the People” in the face of the influx of big money in our democracy. And inside, one wealthy man will ask for permission to pour even more money directly into political campaigns.

Which side are you on?

Marge Baker is the executive vice president of People For the American Way Foundation. PFAW.org
Distributed via OtherWords. OtherWords.org