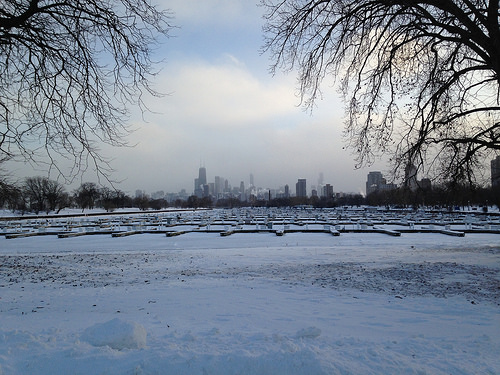 California isn't experiencing cold weather this winter, but it's as vulnerable to the deepening climate crisis as the rest of the country.
By Jill Richardson | January 29, 2014

“It’s been a bit cold here,” my dad told me on a recent phone call. He lives in Chicago; I’m in San Diego. The next time I turned on the news, I saw headlines screaming “Polar Vortex!” with sub-zero temperatures across the Midwest.

Dad’s known in our family for his stoicism and even keel, but his understatement about the weather was a bit much, even for him. Surely he’s noticed that the weather has taken a turn from its normal Chicago standard of freezing and windy to hypothermia-inducing temperatures so cold that even the polar bear at the zoo couldn’t take it anymore. 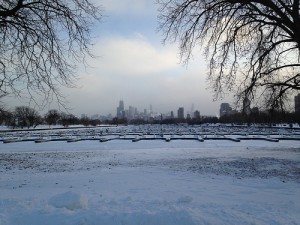 I realize that, in such times, we San Diegoans are universally hated by most of the rest of the country. Nobody sheds a tear for me when I complain about there being only a few days in the 90s amid our normal wintery perfection of 70s and sunny.

I feel like a kid who’s been told Christmas is canceled because the drought we’re suffering will hurt this year’s crop of wildflowers. But the lack of snapdragons and lupines I look forward to each year is nothing compared to the other catastrophic impacts of California’s drought.

Half of the fruits, nuts, and vegetables grown in the U.S. are grown in California. And growing them requires water. Our annual rainfall also helps mitigate the risk of wildfires like last year’s massive Rim Fire. And those are just two major impacts of the drought on humans. Who knows which endangered species could be pushed over the edge by the lack of moisture?

Across the nation, the weather this winter is strange. And yet, some feel that the cold temperatures are proof that “global warming” is not upon us after all.

The term “global warming” refers to the average increase in global temperatures. The key word in that sentence is “average.” If you average the wealth of Bill Gates with your own holdings and my own, then on average we are billionaires. But I’m still broke.

Accordingly, the world can heat up and freak polar vortexes can cause record lows in most of the lower 48 at the same time. The world’s 10 warmest years on record occurred after the year 2000, according to NASA and the National Oceanic and Atmospheric Administration (NOAA).

That’s why it makes more sense to use the term “climate change.” After all, the phenomenon caused by increased levels of greenhouse gases in the atmosphere can sometimes manifest itself in ways that don’t involve warmer–than-usual weather every single day. We can expect the changing climate to dish out more weather extremes than before — including extremely cold and snowy winter weather.

But climate change sounds almost benign. It doesn’t convey the disaster at hand. The climate is just changing. No biggie.

That’s why I prefer the term “climate crisis.” It removes the idea that we won’t have winter extremes but adds the notion that this change is, in fact, a major problem.

We’re seeing the beginning of climate change in our country, and we’re getting such an insignificant taste of it that many Americans deny it’s happening at all. But if the climate crisis continues, the drought that is bringing California to its knees will become the “new normal.” The rest of the nation will have to get their fruits and veggies from somewhere else.

In other parts of the world, the existence of a climate crisis isn’t up for debate. In the Bolivian Andes, the rains now come late, causing trouble for farmers. In Kenya, scientists have documented malarial mosquitoes bringing the disease into new parts of the country as temperatures rise. Along with many small Pacific islands, Palau is pleading for climate action that might save their homelands from being washed away.

We need to take action to prevent the climate from making our planet inhospitable to human life, and we won’t get very far if our national debate on the existence of the climate crisis is set back by every single snowstorm.