Coke Still Needs to Get Real

The soda giant's slick campaign to make us think its products are getting healthier might change public perceptions — but it won’t make soda good for you.
By Jill Richardson | January 23, 2013

For the first time, the company is using its slick commercials to address obesity. Obesity became a high-profile issue in the 1990s, when the government started to classify more than half of Americans as overweight or obese. Soda companies are often targets of anti-obesity campaigns because their products contain massive amounts of sugar with no nutritional value.

But Coke’s new ads, which are brimming with misleading statements, just put lipstick on this pig.

The inaugural commercial begins by explaining how many low- and no-calorie beverages the company makes. But just because they make them doesn’t mean that that’s what Americans are drinking. Three of the company’s top four sellers in 2011, each exceeding $10 billion in sales, were sugar-laden sodas and the fourth was Diet Coke.

As for the rest of the company’s portfolio, it peddles juice and juice drinks, sports drinks, energy drinks, and bottled water. Except for the water, these are all essentially bottled liquid sugar. In some cases, the liquid sugar contains some vitamins. 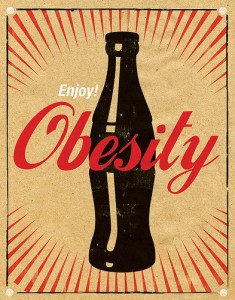 Even though fruit juice comes from fruit, it takes about three or four oranges to make a cup of juice. Do you ever sit down and eat four oranges at once? I didn’t think so. Even if you did, you’d consume fiber in addition to sugary juice, and you’d feel full and eat less later. When we drink our calories, our bodies don’t respond by eating less later like they do when we eat calories.

As for the diet and no-calorie products, studies have found that artificial sweeteners actually make you fatter. Experts can’t say exactly why. They say it could be because artificial sweeteners trick your brain into craving more sugar or because they disrupt the good bacteria our guts need to keep us healthy. Maybe it’s both of these things or something else. But people who guzzle Diet Coke and similar beverages should realize the link to weight gain is there.

And when it comes to the healthiest of Coca-Cola’s beverages, water, I’ve got news for you: You can get it for free out of your tap. If you’d like, you can even filter it and put it in a bottle. Because filtered tap water’s all you’re getting when you buy Coca-Cola’s brand, Dasani. And at prices equal to $8 per gallon, it’s more expensive than gasoline.

Another claim? Now Coca-Cola sells its products in smaller, portion-controlled sizes. Now you can drink a mere 7.5 oz of liquid sugar — only 90 calories. But far more common are the 12 and 20-oz servings found in stores and vending machines, and a “small” Coke at the movies can be 30 ounces. That little treat can pack 360 calories. A “large” soda at the movies now consists of 52 ounces of carbonated sugar water, clocking in at more than 600 calories. That’s like drinking a Coke for dinner.

Yes, all calories count. We humans can only eat so much in a day. And if we stuff our faces with liquid candy devoid of nutrients, then we eat less of the nutritious foods our bodies need to function and stay healthy.

Additionally, the impact of flooding our veins with a rush of sugar harms our bodies in ways that eating the same number of calories in a healthy meal doesn’t. In fact, a 12-ounce can of Coke or Pepsi contains more sugar than the American Heart Association says one should consume in an entire day — almost ten teaspoons of the sweet stuff.

I don’t see how Coca Cola can legitimately address public health in a constructive way while continuing to push such toxic products.

Here’s one idea. Why doesn’t the soda giant stop splurging on this expensive and hypocritical publicity campaign and instead donate it to a charity that would help pay for the medical care now needed by its best customers because they drank too much Coke?

That would be but a small step in counteracting the harm they’ve done to our health.