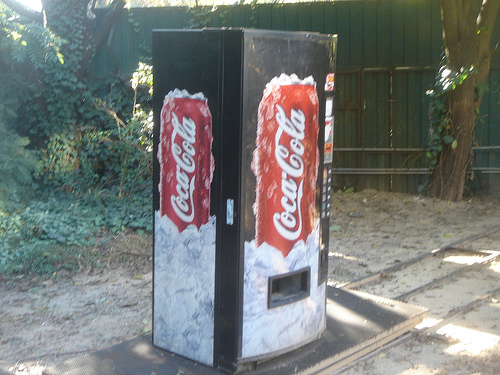 The only truly green thing about a new kind of Coke is the color of its label.
By Jill Richardson | August 7, 2013

Coke’s going green. Or, at least, it wants you to think it is.

There’s no denying that part of Coca-Cola has gone green: the label — in one South American country. In Argentina, the world’s No. 1 soft drink company now sells a new product called Coca-Cola Life with a green colored label.

This pilot version of the bubbly beverage contains an extract of the stevia plant as part of its sweetener, and it’s sold in a plastic bottle made from 30 percent sugarcane. The other 70 percent is hewn from good, old-fashioned, bad-for-the-earth plastic. 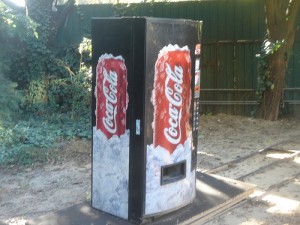 Have you ever tried stevia? The naturally sweet plant is many times sweeter than sugar without any calories, but it tastes weird. Some compare the flavor to licorice. I’m not a fan.

It appears that Coca-Cola couldn’t figure out how to make their product taste good with stevia alone, because this new concoction has 108 calories per bottle. That’s not quite half as many calories as a regular Coke, but more than the American Heart Association recommends that women consume from added sugars in an entire day (men can have up to 150 calories from added sugars).

I’d like to know what’s in there to cover up the stevia taste. And we all should consider whether adding stevia makes food and beverages better for the environment.

It does make Coca-Cola Life lower in calories, but stevia itself is only as green as the farming methods used to produce it. Coca-Cola just wants you to feel good about drinking its product.

And then there’s the bottle. Made — in part — out of sugarcane. Maybe that’s better than the kind of plastic 100 percent made out of petrochemical products. But not by much.

One of my most memorable travel experiences was a day spent driving through a sugarcane growing area of eastern Bolivia. We drove for miles and miles with nothing but sugarcane and eroded soil on either side of us. The area used to be a tropical forest.

At one point, our bus got caught in a traffic jam behind truck after truck filled with sugarcane, lining up to deliver it to a refinery. The refinery smelled terrible, and the locals reported that its pollution occasionally caused fish kills in nearby rivers.

It’s nice to think of a bottle coming from plants, but acres and acres of mass-produced sugarcane? It’s not green, natural, or sustainable.

Remember the term Stephen Colbert famously coined in 2005, “truthiness,” defined as “truth that comes from the gut.” You feel that something is true, even if the facts contradict it.

Greenwashing is like truthiness. I feel that this drink is good for the planet. I feel that it’s good for my body. And you can feel that as much as you want, but it doesn’t make it the truth. It could, however, add up to tidy profits for Coca-Cola.

Soda is the easiest junk food for supporters of a healthier diet to point our fingers at for one simple reason: It contains no beneficial nutrients whatsoever. And Coca-Cola is just about everywhere in the world, always within arm’s reach.

Coca-Cola is therefore in an unenviable position right now. Its entire corporate history is built on a product that’s perhaps the biggest culprit of modern diet-related illnesses.

The sad fact for Coke drinkers — and for the $195 billion company — is that human bodies aren’t made to guzzle sugary drinks. Not even when they contain slightly less sugar. Even if a pretty new green label and a fancy new bottle makes us forget these facts, our bodies will do the remembering for us.

The best thing the maker of Coca Cola, Sprite, and Fanta could do for the world’s health is stop selling soda. Of course, it won’t ever do that. Instead, it’s finding ways to make the corporation look good.

But lipstick on a pig is still lipstick, even when it’s green.