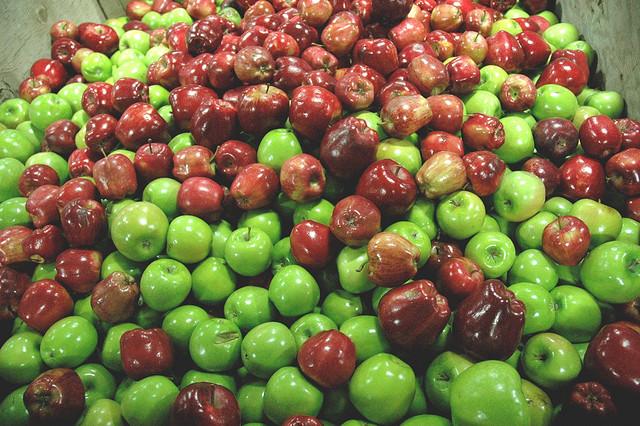 The creation of a new genetically modified apple highlights once again the need for clear labeling of this kind of food.
By Wenonah Hauter | October 10, 2012

Meet the Arctic apple. In the field-trial stage since 2003, this fruit has had bacterial and viral DNA inserted into it — a genetic modification that prevents browning when bruised or sliced. One company, Okanagan Specialty Foods, has been testing these genetically engineered apples in New York and Washington — the country’s biggest apple-producing states. Now, they’re up for regulatory review by the Department of Agriculture (USDA).

If approved, most Arctic apples will be used in fresh-cut apple slice processing and by food service businesses, with some going into juice. But traditional apple growers, including trade organizations such as the U.S. Apple Association and the Northwest Horticulture Council, aren’t exactly thrilled. Not only could it hurt traditional growers’ market share, but nearby organic and traditional orchards may be contaminated with pollen from these newfangled apples and there could be cross-contamination at the processing level as well.

Even the top sliced-apple company is concerned about the food safety and consumer confidence ramifications of these apples because they could mislead consumers into thinking they’re about to bite into a fresh, juicy apple rather than one on the verge of rotting.

Are all of the risks really worth it for an apple that resists a minor aesthetic flaw? Millions of research dollars have sunk into this product so that fast food and processing companies can let sliced apples sit around in plastic bags longer. 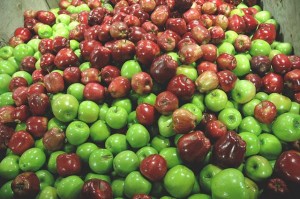 And, worst of all — as with all genetically modified foods — these apples won’t be labeled. Consumers will have no way to tell that they’re eating them. Okanagan claims they’ll use an Arctic apple sticker and an indication of its “non-browning trait benefit,” but there’s no law requiring any kind of labeling. While the European Union has required the labeling of most genetically engineered foods for years, there’s no such requirement in the United States.

Right now, the vast majority of processed foods contain modified ingredients, particularly corn, soy, and their derivatives. But in recent years, these crops have steadily crept into the produce aisle. Washington has approved a total of 87 since the 1990s, seven of which the Food and Drug Administration approved in 2011 alone.

With little regulatory oversight and even less independent, long-term scientific study on their impact on human health and the environment, it’s no wonder that a majority of consumers would not eat this newfangled food and nearly all — 90 to 95 percent — want genetically modified food to be labeled so they can make informed choices.

In California, more than a million voters have signed to have an initiative on the state’s November ballot to mandate labeling. So far, Proposition 37 has 61 percent support from voters despite large food and pesticide companies spending at least $35 million to confuse the public with misinformation.

Proposition 37 and several other statewide mandatory labeling initiatives in the works are about giving the power of information back to consumers and ending the tyranny that large corporations have maintained over our food supply. And, if there’s one thing more American than the apple, it’s our right to make informed choices — in this case, to decide for ourselves whether or not to serve genetically engineered apples in our pie.