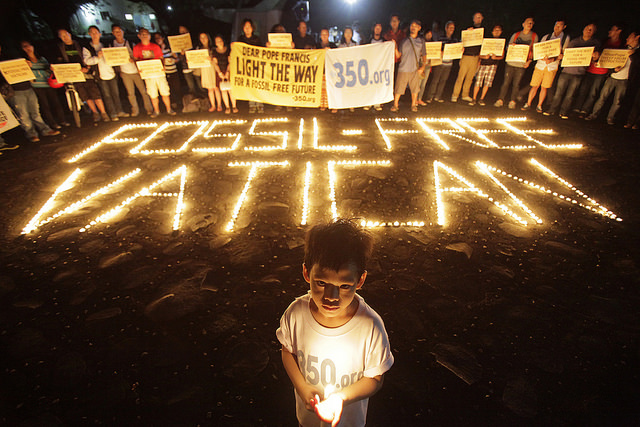 Pope Francis is redefining the ongoing transition to greener energy as a moral and spiritual obligation.
By Emily Schwartz Greco | May 6, 2015

Kicking humanity’s addiction to oil, gas, and coal before those industries render the planet uninhabitable may take a miracle. So it’s a good thing that the climate movement found a patron saint.

I’m talking about Pope Francis, of course. Before an upcoming encyclical makes the Vatican’s stance official, he’s already spreading the gospel of a fossil-free future.

In case, like me, you’re not Catholic: An encyclical is basically a memo the church sends its 1.2 billion believers — one out of six people alive in a community that includes 30 percent of Congress and a gaggle of GOP presidential hopefuls. Here’s looking at you, John Boehner, Marco Rubio, and Jeb Bush.

Two years into what he says will be a brief tenure, the pope’s putting climate skeptics on the defensive.

Fretting about the fate of the Earth is part of his broader condemnation of the global status quo, which Francis considers to be a “throwaway culture.” And it explains why he and some of his top aides came to call for a transition to greener energy. 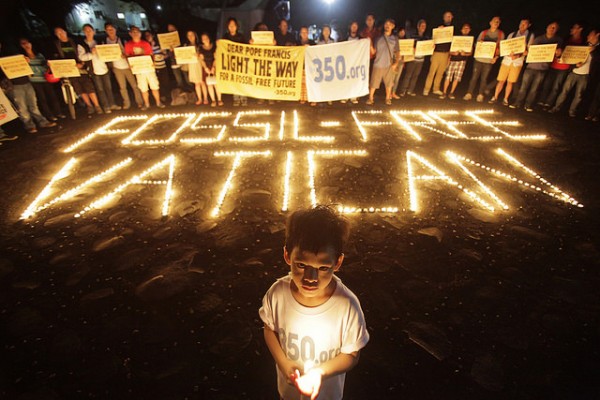 “The ever-accelerating burning of fossil fuels that powers our economic engine is disrupting the Earth’s delicate ecological balance on an almost unfathomable scale,” warned Cardinal Peter Turkson, the Ghanaian cardinal who is taking a leading role in drafting the climate encyclical. “Corporations and financial investors must learn to put long-term sustainability over short-term profit.”

Turkson spoke at a recent Vatican climate summit of religious and secular leaders.

The group, which included Francis, UN Secretary-General Ban Ki-moon, the presidents of Italy and Ecuador, Nobel laureates, and leading scientists, released a statement urging a quick “transformation to a world powered by renewable and other low-carbon energy.”

Some Catholics believe that modern life requires the burning of every drop of oil and every last hunk of coal. Increasingly, this fossil-fuel fundamentalism leaves them at odds with their church.

Once the Holy See officially condemns worship at the altar of dirty energy, those fundamentalists may need to choose between what their church demands and what the oil, gas, and coal industries dictate. Boehner and other conservative Catholic lawmakers will surely squirm in their seats when Francis addresses Congress in September.

And who could be a stronger spokesman for bringing the power of religion to fuel this change?

Even Ban, who refuses to divulge whether he adheres to a specific faith tradition, can now connect with the pious. “Science and religion are not at odds on climate change. Indeed, they are fully aligned,” he declared at the Vatican’s climate summit. “It is a moral issue. It is an issue of social justice, human rights, and fundamental ethics.”

Vatican City has already shrunk its carbon footprint. Pope Benedict XVI installed solar panels on the roof of a big building next door to St. Peter’s Cathedral and ordered a hybrid popemobile.

Francis, however, will take things much further if his encyclical drives all Catholic-run outfits — including schools, hospitals, churches, and retirement homes — to take action.

Plus, he could divest from fossil fuels. Francis is the sole shareholder in the Vatican Bank, a financial institution with $8 billion in assets that previously lacked adequate oversight. He’s already shaken things up there by shutting down accounts belonging to money launderers, mobsters, drug-runners, and corrupt politicians. Barring its investments in oil, gas, and coal could be next.

With the recent news about Antarctica thawing out, there’s no time to lose. So it’s reassuring that Turkson, widely seen as a papal contender himself, speaks so eloquently about the urgency of climate action.

“God has given all of us this planet as a gift, to provide for our needs,” he declared. “And the correct response to receiving such a magnificent gift is surely one of gratitude, love, and respect.”