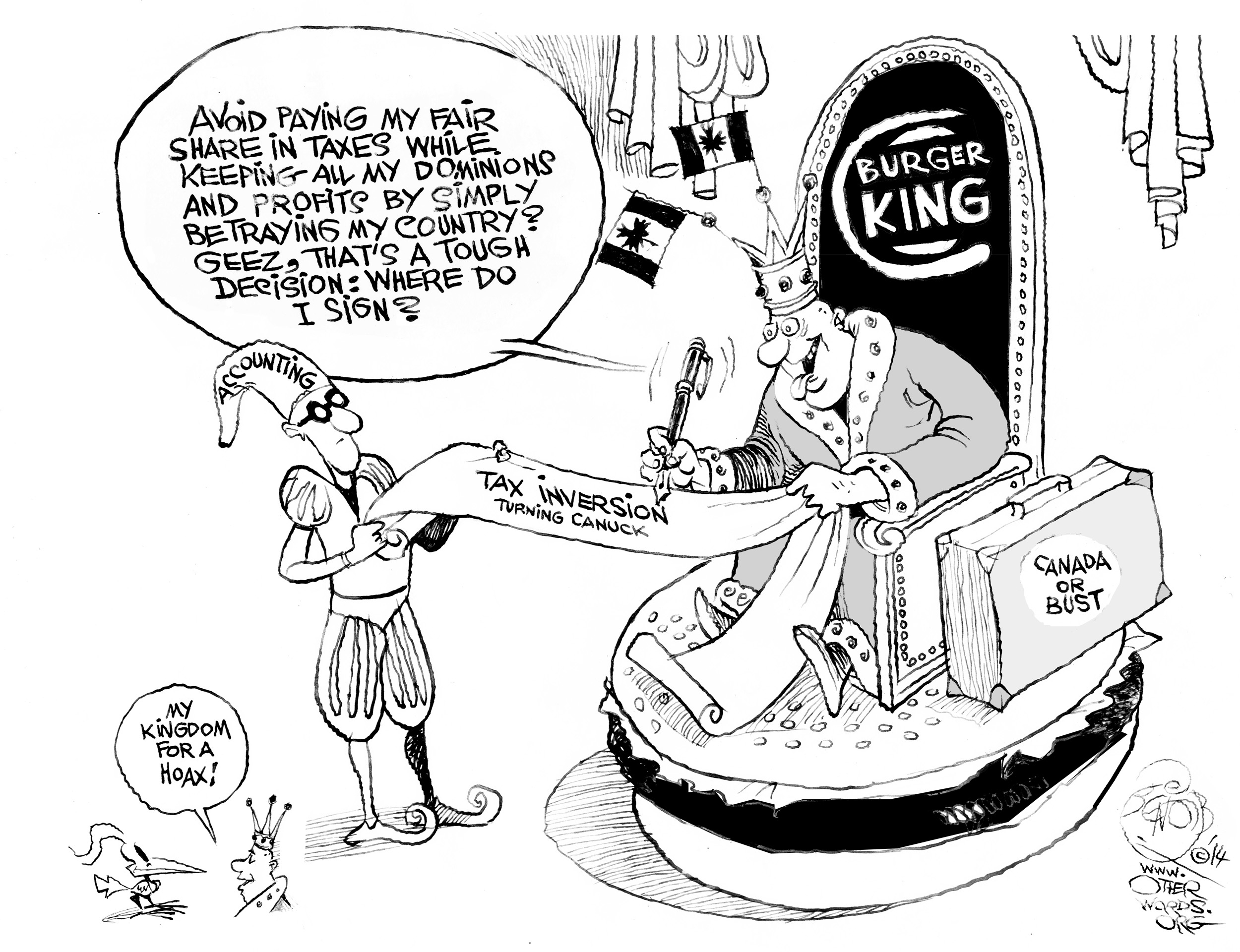 A growing number of companies are pretending to move abroad and shortchanging us all.
By Richard Kirsch | September 24, 2014

Corporations love to wrap themselves in the flag with sun-drenched TV commercials that proclaim a deep devotion to American workers and communities. But when it comes to actually taking responsibility for supporting the workers and communities that create the conditions for corporate profits, a record number of big businesses are deserting America.

Burger King is the latest corporation to announce it is moving to Canada — at least on paper — where it will pay lower taxes. In the past three years alone, at least 21 companies have completed or announced mergers with foreign corporations to avoid taxes in an operation known as “inversion.” That compares with 75 over the past 30 years. These only-on-paper moves will gouge a $20-billion tax loophole over the next decade. 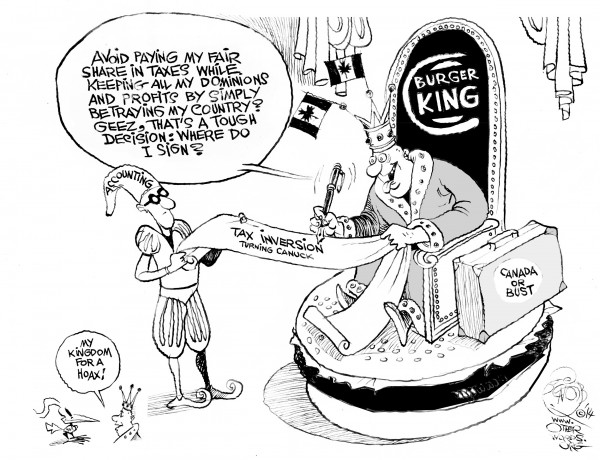 These companies may be moving their taxes overseas, but they’re not ending their reliance on the U.S. government to operate profitably. They are just shirking their responsibility to pay for what they get. The companies still make money in the United States, where they hire workers educated by public schools, ship their goods on public roads, are kept safe by local police officers and firefighters, and protect their patents in America’s courts.

Of course, small businesses and American families can’t play the same traitorous game. We can’t hire lawyers and accountants to pretend to ship our homes and our income overseas. And most of us wouldn’t do that if we could.

We understand that paying taxes is part of our basic obligation as citizens and essential to building strong communities.

What we do resent about taxes is that the current system is upside down — big corporations and the wealthy game the system so they pay a smaller share of their income in taxes than working families and small business. The share of profits corporations spend on taxes stands at a record low. And those profits are reaching record highs.

It’s time to turn the tax system right-side up by closing the tax loopholes that allow billionaires and huge corporations to escape paying their fair share to support the country that made them rich.

The Obama administration just took a major step to do that. Tiring of Republican objections to closing the corporate tax deserter loophole, Treasury Secretary Jack Lew announced he was issuing new regulations aimed at making it much harder for companies to reap tax benefits from an offshore move.

This step may curb some corporate desertion. In the long run, it would be best if Congress took action. Two bills (S2360 and HR4679) would end the current practice of treating corporate deserters as foreign companies when they are still really based right here.

Consumers can play a role too. In August, Walgreen — which bills itself as “America’s drugstore” — abandoned its plan to dodge $4 billion in taxes in the next five years by changing its corporate address to Switzerland. Walgreen reversed course when outraged consumers protested at its stores and on the Internet.

This nation faces huge challenges in building an economy that works for all of us. If we plan to build a better future for our children, we must insist that corporations be held accountable for their responsibilities to our families and communities.

Richard Kirsch is a senior fellow at the Roosevelt Institute and the author of Fighting for Our Health: The Epic Battle to Make Health Care a Right in the United States. He’s also a senior adviser to USAction. USAction.orgDistributed via OtherWords. OtherWords.org