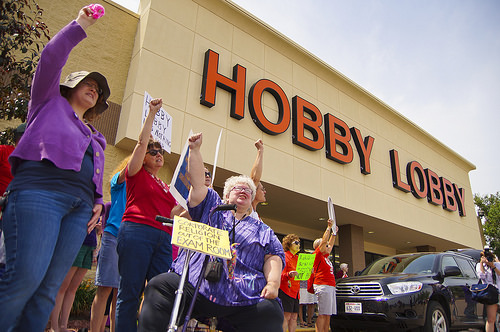 The Republican Party may experience more fallout than any one company from the Supreme Court's birth control ruling.
By Martha Burk | July 16, 2014

Thanks to that ruling, big employers may deny birth control coverage to the female employees whose health insurance they must provide. In other words, the court’s conservative majority didn’t just elevate the rights of corporations over those of women. It also legitimized a form of sex discrimination in employment.

What’s Reid’s plan? That remains a mystery. One option would be repealing the Religious Freedom Restoration Act, the law on which the decision was based. A move like that wouldn’t be likely to pass the Senate with its slim Democratic majority, and rolling back that law stands no chance at all in the Republican-controlled House. 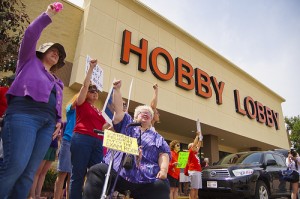 Then there’s a bill Democratic Senators Patty Murray of Washington and Mark Udall of Colorado introduced. Their Protect Women’s Health from Corporate Interference Act would make all corporations pay for contraception coverage, canceling out the Hobby Lobby ruling’s impact.

The Senate bill failed to garner a 60-vote majority. A House companion bill, with no potential for passage, is in the works.

Given the lethargy of this Congress, it’s probably up to women to take direct action against the privately held craft store chain that refuses to pay for its female employees’ IUDs, birth control pills, and other contraceptive options because of its owners’ religious beliefs.

Demonstrations have broken out in several cities and social media is abuzz with hashtags like #DrHobbyLobby and Facebook pages opposing the decision and calling for a boycott.

Other businesses that have sued to exclude birth control from company insurance are also in the crosshairs, including Eden Foods. Among other things, Michael Potter — the natural food company’s CEO — claims contraception “almost always involve[s] immoral and unnatural practices.”

Does that make you want to buy some other company’s organic offerings? You can sign a petition to let Potter know.

Taking aim at individual businesses may have some effect, but I’m sure the Republican Party will experience the most fallout. Even before Supreme Court’s conservative majority handed down their Hobby Lobby decision, Democrats were already looking for votes from single women to help their party hang onto a Senate majority in November’s mid-term elections.

And female voters get that a Republican majority in the Senate could block even moderate Supreme Court justices if the two oldest liberals (Ruth Bader Ginsburg and Stephen Breyer) retire in the next couple of years. If the GOP prevails in 2016, it surely would put more anti-women justices on the Court.

Women, the majority of voters in presidential elections since 1964, have been dumping the Republican Party for decades. As of the last election, the gender gap in party identification was 18 points in favor of the Democrats.

Long before the Hobby Lobby ruling, women were telling pollsters that the Grand Old Party just doesn’t understand them. According to a CNN/ORC International poll released earlier this year, 55 percent of Americans surveyed say the GOP doesn’t understand women. Among all women, the number climbs to 59 percent, and an even higher 64 percent for women over 50.

It’s a good bet young women are now approaching their mothers’ level of disdain in the wake of the no-birth-control-for-you decision.

Republicans say the “war on women” Democrats accuse them of waging is a fake issue. Really?

If this isn’t a war on women, it’s one heckuva frontal assault. We’ll see who wins in November.