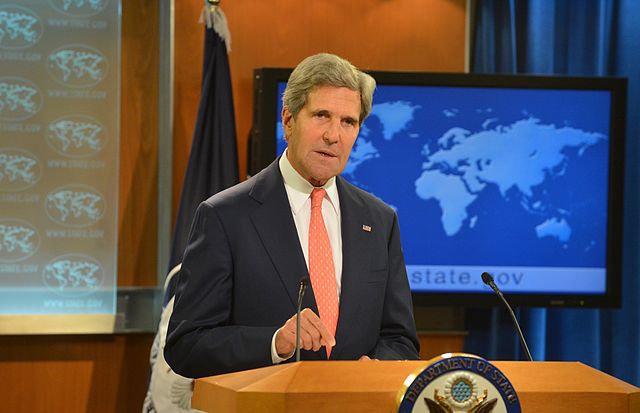 The Off-the-Cuff Breakthrough on Syria

Moscow has no more interest than Washington in escalating this war.
By Peter Certo | September 11, 2013

John Kerry may have just accidentally earned himself a Nobel Peace Prize.

In off-the-cuff remarks to reporters, the Secretary of State reiterated his support for a U.S. attack on Syria, saying Bashar al-Assad could only ward off a U.S. strike by turning over his regime’s chemical weapons to the United Nations. “It can’t be done, obviously,” Kerry shrugged on September 9, seemingly resigning the American people to another war in the Middle East. 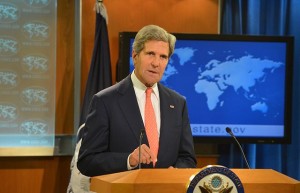 That afternoon, the Russians offered to facilitate just such a deal. Syria accepted and promised to sign the international chemical weapons convention. France also said it would bring the issue before the UN Security Council. Washington should follow suit and take the deal. And maybe Obama should let Kerry go off the teleprompter more often.

The Obama administration still continues to hold a hammer over Syria. But Syria isn’t a nail. It’s more like a landmine.

If it had any effect on Syria’s civil war at all, a U.S. strike would create new openings for al-Qaeda-linked rebel groups, including some of the same Sunni extremist groups the United States fought in Iraq, which long ago eclipsed more secular-minded forces like the Free Syrian Army. And for anyone who thinks they’ll return the favor with gratitude, recall that Osama bin Laden himself was among the Mujahideen fighters that Washington supported against the Soviets in Afghanistan.

A large-scale U.S. bombing campaign would also push more fighters and refugees into fragile states like Iraq and Lebanon — where the war has already spread — and could instantly drag the United States into a tailspin of regional turmoil.

Even a quick, “surgical” strike could escalate into a full-scale war if Syria or its ally Iran retaliates by targeting any of the U.S. forces or diplomatic facilities that blanket the Middle East.

And even if he doesn’t hit back, if Washington tanks this deal with Russia and goes to war, Assad could still lash out at Syrian civilians with chemical weapons. (When NATO intervened in Kosovo, after all, the Serbs immediately escalated their ethnic cleansing operations.) In that case, would Washington keep bombing — unavoidably killing civilians and potentially rallying some Syrians around the regime — until he stops?

Some proponents of a strike say that Washington must uphold the international norm against the use of chemical weapons. But since Syria hasn’t attacked the United States and the UN Security Council hasn’t authorized any international military action, a U.S. strike on Syria would be unambiguously illegal under international law. Enforcing a humanitarian norm with an illegal war is a lousy way to uphold international justice.

Fortunately, we’ve got many more options than that. First, Washington should accept Russia’s offer to get Syria’s chemical weapons under international control. The Russians are hardly impartial observers here, but neither are we — and Moscow has no more interest than Washington in escalating this war.

Then, Washington should engage directly with Russia, Iran, and its own allies in Europe and the Middle East to negotiate a full international arms embargo on the regime as well as the rebels. Until these parties reach a deeper understanding of each other’s regional interests, they’ll continue to use Syria as a proxy battleground. And as long as the weapons are flowing in, the combatants will never tire.

Finally, don’t forget that many, many Syrians are desperately in need of humanitarian aid. The UN estimates that this war has turned over 2 million Syrians into refugees, and international aid has fallen far short of what’s required to help them. For those who want to “do something” about Syria, this is the easiest place to start.

Some people still insist that President Barack Obama’s “credibility” depends on enforcing a “red line” in Syria. Well, there’s nothing worse for your credibility than making a huge mistake just because you promised something you shouldn’t have.

And if John Kerry’s recent remarks are any indication, maybe there’s something to be said for saying things you don’t mean after all.

Peter Certo is the acting editor of Foreign Policy In Focus  fpif.org.
Distributed via OtherWords. (OtherWords.org)