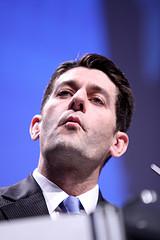 Rep. Paul Ryan from Wisconsin revels in his reputation as America’s ultimate conservative policy “wonk.” He plays the part well. At the drop of a hat, the Republican lawmaker can rattle off a stream of stats that make his rich-people-friendly budget nostrums seem almost reasonable.

Last month, for instance, Ryan smoothly dispatched an angry constituent who dared challenge the tax-no-rich federal budget plan that has made the Wisconsin lawmaker a right-wing hero. That constituent, speaking at a town hall meeting, had just finished noting he saw “nothing wrong with taxing the top.” Ryan saw his opening — and pounced.

“We do tax the top,” Ryan earnestly responded. “Let’s remember, most of our jobs come from successful small businesses. Two-thirds of our jobs do.”

“You got to remember,” he went on, “businesses pay taxes individually. So when you raise their tax rates to 44.8 percent, which is what the president is proposing, I would just fundamentally disagree. That is going to hurt job creation.”

For Ryan, a perfect sound bite. He made, in seconds, the case against raising taxes on the rich.

The wealthy, that case goes, already pay taxes aplenty. As hard-working — and mostly small — businesspeople, they can’t afford to pay more. And if you try to make them, they won’t be able to create jobs.

Does any of this hold water? Do we already “tax the top,” as Ryan rushes to claim?

The facts: Taxpayers at America’s tippy top — taxpayers with the nation’s 400 highest incomes — have seen the share of income they pay in federal income tax drop from 51.2 percent of their income in 1955 to 18.1 percent in 2008.

How about Ryan’s claim that the president wants to raise the tax rate to “44.8 percent”? Ryan here is blurring the distinction between top “marginal” tax rates, which apply only to a portion of one’s income, and a taxpayer’s overall tax liability, the total amount that he or she is required to pay.

Our tax code currently sports a top marginal rate of 35 percent, down from 91 percent in the 1950s. But this 35 percent top rate only applies to the portion of one’s income over $379,150, not total income. President Obama wants to raise our top rate to 39.6 percent.

Americans also pay a federal payroll tax for Medicare. Under the health care act passed last year, wealthy Americans will soon pay a 3.8 percent Medicare surtax on income over $250,000 they make from investments. Until now, no Medicare taxes have been collected from taxes on investment income.

Rep. Ryan, to get to his “44.8 percent,” has mixed all these income and payroll tax rates together, a blatantly bogus exercise, especially because most small businesspeople don’t make anywhere near $379,150, let alone $250,000. The actual small business income average is just over $100,000.

Few small businesspeople make much money off capital gains. Instead, they make their money when customers in their communities have jobs and money to spend. If the Ryan budget ever gets all the way through Congress — the House has already blessed it — small businesses would have fewer customers with dollars to spend. The reason: Ryan’s budget cuts spending that helps average Americans to fund tax cuts for rich Americans.

Paul Ryan’s sound bites have shoved what we need — substantially higher taxes on the rich — off the political table. We need to get them back on.

Sam Pizzigati edits Too Much, the online weekly on excess and inequality published by the Washington, D.C.-based Institute for Policy Studies. toomuchonline.org