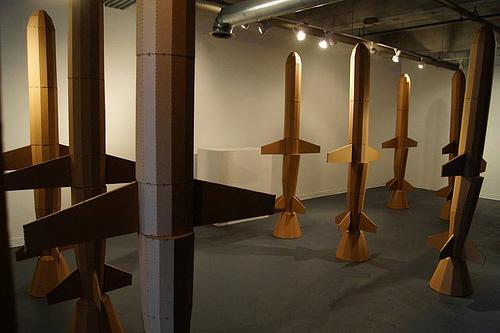 The Pentagon is scrambling to protect its flank in these budget-cutting times.
By Ryan Alexander | October 24, 2011

The Association of the United States Army packed hundreds of exhibitors into two halls the size of football fields at its annual convention. Companies from around the world came to the event, recently held at the Washington Convention Center, to sell the Army everything from mammoth tanks to micro-thin wires. Corporations such as Raytheon and KBR erected multi-level installations nearly big enough to generate their own zip code, complete with conference rooms and coffee bars.

Had the political leaders tackling our budget mess visited this spectacle, they would have gotten a good lesson on federal spending. The Pentagon’s budget stands the risk of being subjected to a process known as “sequestration,” which would impose $600 billion in defense cuts over 10 years if Congress doesn’t approve a $1.2-trillion deficit-slashing plan that the panel of lawmakers known as the supercommittee will propose later this year. In his address to the convention, Defense Secretary Leon Panetta called this plan a “doomsday mechanism.” 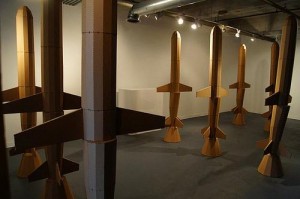 Later, Rep. Randy Forbes (R-VA), who represents a district heavy with defense contractors, launched an initiative claiming that sequestration would “cause significant harm to United States interests.” He was echoing a report released last month by the Republican staff of the House Armed Services Committee that read like a list of campaign debate talking points. It was light on facts but replete with fear-mongering claims that reductions risked “increasing the threat of nuclear proliferation,” as well as our ability to “adequately defend allies.”

This all cleverly misses the point. Sequestration was meant to be the scary stick to get Congress to take its deficit-cutting medicine. What big military budget boosters are trying to do with this line of reasoning is to protect Pentagon spending in the supercommittee’s deliberations.

It’s no surprise that the Pentagon would scramble to protect its flank in these budget-cutting times, but the offensive from Panetta, some members of Congress, and industry titans is brazenly alarmist — and sometimes downright wrong. Panetta told Congress that sequestration would increase the country’s unemployment rate by 1 percent, despite the absence of any evidence.

Let’s review some more facts. First of all, the $450 billion in Pentagon cuts that the debt ceiling deal enacted would only lower the rate of increase in military spending, a rate that has gone through the roof in the last decade. In other words, it isn’t actually a “cut” at all. Even that so-called “doomsday mechanism” would only shrink the Pentagon’s budget back down to where it stood in 2007.

Second, with our country facing a $1.3-trillion deficit, everything must be on the table. Consequently, as the consumer of the largest piece of our discretionary budget pie, the Pentagon must be part of the budget-cutting plan. There’s certainly plenty of fat to cut. The Defense Department buys more than $1 billion of goods and services every day. It employs some three million people globally, more than the world’s largest corporation. Its headquarters, the Pentagon, is the world’s largest office building. If that doesn’t epitomize Big Government, what does?

Finally, the chances of sequestration coming to pass are slim to none, and Rep. Forbes and his allies know it. The supercommittee will produce a plan and the broader Congress is bound to adopt the recommendations or come up with some of its own.

This full-court press on behalf of Pentagon spending looks like an attempt to dissuade the supercommittee from making any military cuts at all, or to prepare for the battle soon to take place in Congress. Exploiting taxpayers’ anxieties about jobs and safety is a cynical way to avoid making tough decisions that will affect our security for decades to come.