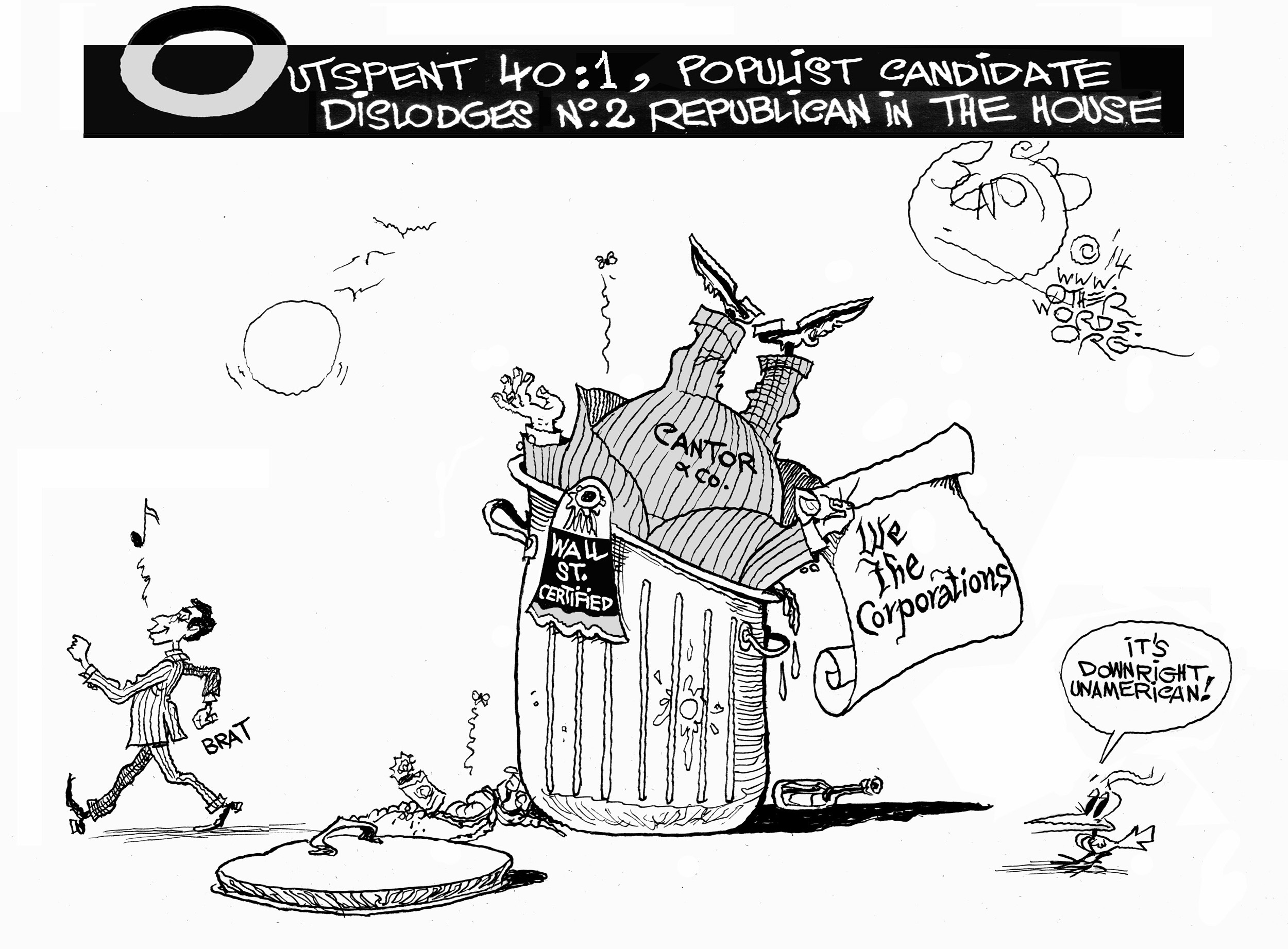 What Democrats Can Learn from Cantor’s Loss

David Brat, the man who unexpectedly defeated Eric Cantor in a recent Republican primary, is an ideologue. That should be a source of encouragement for candidates on the populist left — but not for the reasons you might think.

Brat is a professor whose college chair is endowed with libertarian money and ran a campaign rife with tea-party slogans. Yet it would be wrong to minimize Brat’s victory, like Hillary Clinton did, as solely the result of his across-the-board opposition to immigration reform. That theory deflects attention from the populist side of Brat’s campaign, thereby minimizing a movement that presents a potential threat to Clinton and a number of other Democrats. 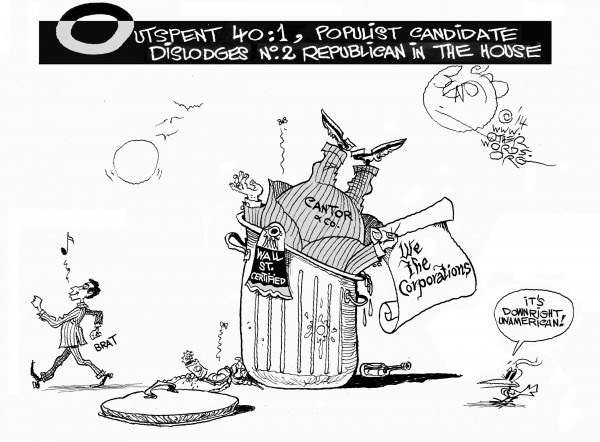 Brat made Cantor’s Wall Street ties a key campaign theme by tapping into a frustration with corrupt Washington politics that spans the political spectrum. “I’m an economist. I’m pro-business. I’m pro-big business making profits,” Brat declared on the campaign trail. “But what I’m absolutely against is big business in bed with big government. And that’s the problem.”

It’s no wonder that reporter Ryan Lizza described Brat in The New Yorker as “the Elizabeth Warren of the right.” When Brat says “the Republican Party has been paying way too much attention to Wall Street and not enough attention to Main Street,” he echoes the Massachusetts senator’s theme that “the system is rigged for powerful interests and against working families”— and the argument progressive Democrats are making about their party’s dominant wing.

That’s why Brat’s candidacy doesn’t belong in the standard tea-party basket. Cantor more closely fit this mold, with his fiery tea party-like rhetoric belying the fact that he was very much part of the Beltway elite, a Republican apparatchik, and a friend of the corporate class.

When Brat called Cantor out — “the crooks up on Wall Street and some of the big banks…they didn’t go to jail. They are on Eric’s Rolodex” — the underdog garnered enough votes to win a race against a top dog.

His mix of messages comes as no a surprise to people like me who track polling data on economic issues. It’s been clear for years that anti-corporate populism appeals to voters across the political spectrum.

Inside-the-Beltway consensus thinking tends to dismiss voices on both the left and the right as unimportant to the political process. The mythical “truly undecided centrist voter” — that legendary creature situated precisely halfway between the Republican and Democratic parties on key issues — has led the political class to ignore the electoral power of ideological voices.

Many Democrats are making the mistake of embracing the same pro-corporate positions as their Republican opponents while losing touch with what’s happening back at home.

Far-right media personalities, including Laura Ingraham and Mark Levin, gave Brat a tremendous leg up among conservative-populist true believers, stoking their enthusiasm and fueling both organizational efforts and turnout.

The left has its voices, too, and insurgent Democratic politicians shouldn’t be reluctant to rely on them just because they’re afraid that the “in crowd” in Washington will marginalize them. As Brat’s victory shows, distancing yourself from the in crowd can pay off.

Ideology has gotten a bad name from members of both parties who would rather push a Washington-corporate consensus than have a real debate on the issues and principles that should drive our nation’s decision-making.

What will happen if Republicans like Brat, with their anti-immigrant populism, face off against Democrats like Elizabeth Warren imbued with a populism grounded in economic justice? We might finally have a real debate about how to break the corporate stranglehold on politics and the economy.

Richard J. Eskow is a fellow at the Campaign for America’s Future and the host of The Zero Hour, a nationally syndicated radio show.