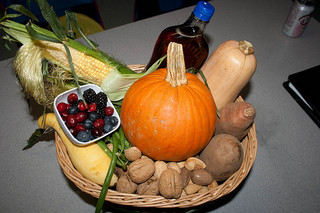 Who Deserves Our Thanks for Truly American Food?

What do turkey, sweet potatoes, and cranberries have in common?

Yes, you eat them on Thanksgiving. Additionally, they are all distinctly American foods. So are potatoes and the corn in your corn bread.

Believe it or not, the day that Columbus blundered into the Americas back in 1492, Europeans (and Asians and Africans) had none of those foods.

Thanksgiving is perhaps the one day a year when we Americans celebrate with truly American food. 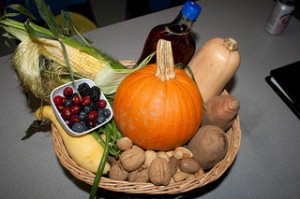 For me, and many Americans, Thanksgiving isn’t really a time for remembering the saccharine and inaccurate historical event we are supposedly commemorating. (You know, the Pilgrims and the Indians.) Nor is it really a time to celebrate a bountiful harvest. In this age of supermarkets, few of us rely on the whims of nature to produce enough to make it through the winter.

In our family, Thanksgiving means celebrating being together. We cherish the warmth generated by love as much as the delicious meal. There’s no distraction of Santa Claus or anything else. We’re all there for the food — and for each other. (And, for some, for the football on TV.)

But what about those Pilgrims and Indians?

Perhaps you haven’t thought too much about them since grade school, back when you made paper turkeys by tracing your hand in art class. But they are more relevant than you might guess.

No part of the traditional Thanksgiving meal would be possible — save perhaps the cranberries — without the ingenuity of Native Americans. Centuries before the Pilgrims arrived on American shores, Native Americans domesticated all the crops (and turkeys) we now take for granted.

For Native American cultures, the arrival of the Pilgrims wasn’t exactly the beginning of the end — because Native Americans and their cultures are still alive today — but it did mark a moment when their continent was no longer their own.

Truthfully, the turning point had already come and gone. Tisquantum, the friendly Indian that children learn about as “Squanto” in the Thanksgiving story, was actually a Patuxet man whom Europeans kidnapped and brought to Europe long before the Pilgrims sailed to Plymouth.

Years later, when he returned to his home in Massachusetts, he found that his people had been wiped out by an infectious disease brought by Europeans.

I’ve been fortunate enough to get to know the tribe near my home in San Diego, the Kumeyaay. I consider myself lucky not only because they offer fantastic classes on their language and culture, but also because they are here, in their homeland. Many tribes were forced to give up their land and move somewhere else — often to Oklahoma.

Another stroke of luck: The ecosystems of San Diego remain relatively intact in large stretches of the county. It’s not too hard to find elderberry, mesquite, acorns, quail, or anything else one needs to cook up a Kumeyaay feast. Tribes that once relied on bison cannot say the same.

The very plants, animals, and landmarks of Southern California represent more to the Kumeyaay than their food or building materials. Their religion is also based on this very land. It’s a part of their identity.

The Native Americans we superficially commemorate on Thanksgiving aren’t just a part of this country’s history. They are here in the present, and often the injustices against them from the past remain uncorrected.

This year, we should all give thanks to Native Americans, who have contributed so much to your holiday meal and to this nation. And consider: How can we right the wrongs of the past committed against them?