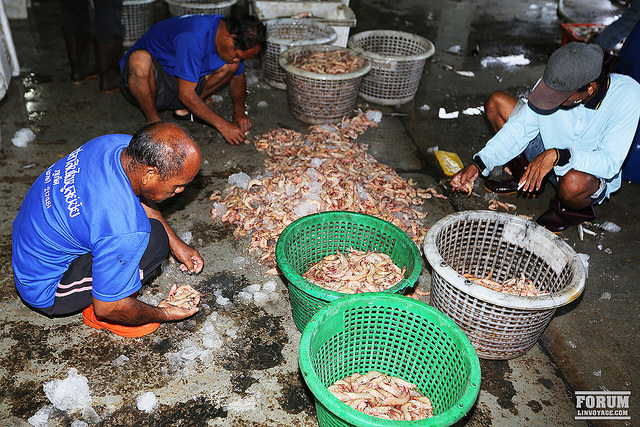 Did Slaves Catch Your Seafood?

Men who live in cages may have caught the shrimp at your supermarket.
By Elizabeth O’Connell Jardim | April 15, 2015

A few years ago, a friend promised Asorasak Thama a job in the Thai fishing industry. The job offered good pay for a few weeks of work.

Instead, he wound up trapped at sea for a year, working in terrible conditions for no pay at all. Thama had become a slave.

Authorities rescued Thama and his crewmembers when they stopped the boat he was trapped on for fishing illegally in Indonesian waters. A few years later, however — after a stranger drugged him at a bar in southern Thailand — Thama found himself enslaved again.

When his boat came into shore to get a fishing license from Malaysia, he waited until the captain had had a few drinks, then punched him and fled.

Despite these terrible ordeals, Thama is one of the lucky ones — he escaped. Filmmaker Shannon Service will share Thama’s ordeal and long road back home in an upcoming documentary called The Ghost Fleet.

There’s no official data on how many men are enslaved on fishing boats in Thailand. The Thai government estimates that up to 300,000 people work in its fishing industry, 90 percent of whom are migrants — and therefore vulnerable to being duped, trafficked, and exploited. 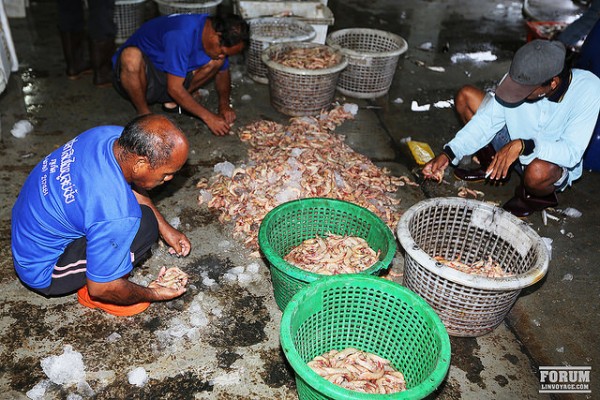 These workers come to Thailand in hopes of earning money to support their families back home. But while they fill a major labor shortage in the country, they don’t enjoy the same protections as Thai workers, such as freedom of movement and association.

Migrants rely on a complex and murky network of brokers to help them find jobs — for a fee. The brokers sometimes lure workers with false promises of factory jobs, but instead sell them to ship captains as laborers.

Many wind up working in debt-bondage to pay off transport and work-permit fees. If the men are paid at all, it’s often much less than they’d been promised.

And the conditions are awful. Fishermen have reported working 20 hours or more at a stretch. The boats can stay at sea for years, since captains are reluctant to risk losing their workers by bringing them ashore.

Some captains give workers methamphetamines to keep them going, The Guardian reported last year. They survive on bits of fish they catch that cannot be sold.

Many die at sea. Some drown attempting to escape, while others are thrown overboard when they’re too sick to work.

It gets worse. A yearlong investigation by the Associated Press recently revealed dozens of fishermen held in cages on an island called Benjina in Indonesia. Some hadn’t communicated with their families for 10 years.

In all, it turned out, hundreds of other men were stranded on this island. Dozens lay buried in a crude graveyard nearby, roughly 3,000 miles from home.

The AP tracked the fish caught by the captives on Benjina to a Thai harbor, where it was then sent to various distribution points. From there it wound up with wholesalers like Stavis, which sells packaged fish that can make its way to supermarket shelves in the United States.

The AP followed the slave-caught fish to another distributor called Thai Union, which in turn sells to Wal-Mart, as well as to popular pet food brands like Fancy Feast, Meow Mix, and Iams.

What can you do?

By speaking out against companies profiting from exploitation — and choosing to buy more responsibly sourced products — consumers can change corporate practices. They’ve proved it in the past with other products, from chocolate made from child labor to tuna caught by nets that kill dolphins.

Asorasak Thama made it home, and the men on Benjina are on their way, too. But hundreds of thousands of others aren’t so lucky. It’s time for governments, companies, and consumers to stop turning a blind eye to slavery in the seafood sector.