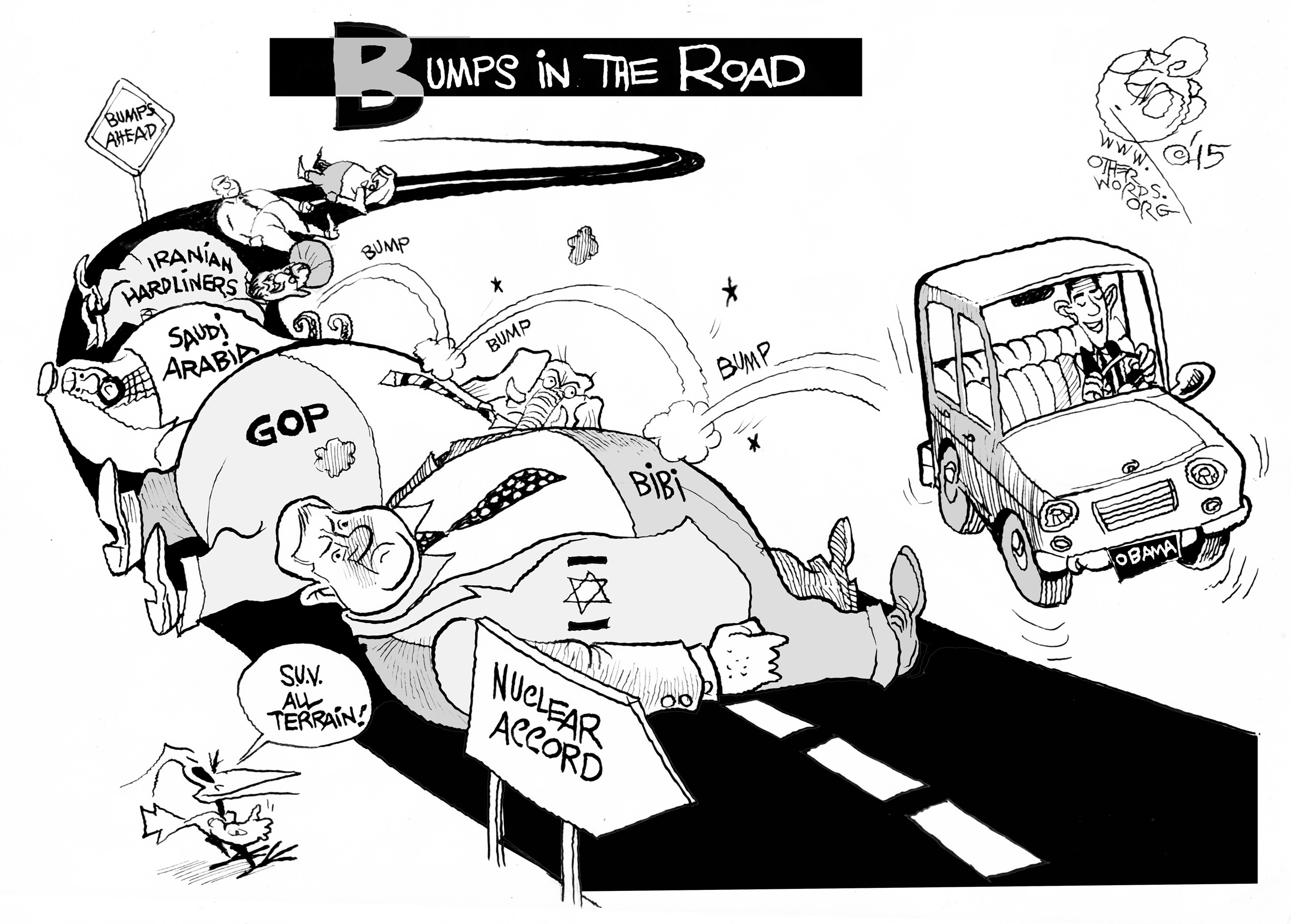 Bumps in the Road, an OtherWords cartoon by Khalil Bendib

Diplomacy Defeats War for a Change

More than sanctions and centrifuges are at stake in Iran’s nuclear deal.
By Phyllis Bennis | April 8, 2015

With their groundbreaking agreement over Iran’s nuclear enrichment program, negotiators in Lausanne, Switzerland scored a major victory for diplomacy over war.

Both sides made major concessions. But Iran’s concessions are far greater.

Tehran agreed to severe cuts in its nuclear infrastructure, reducing its current 19,000 centrifuges for enriching uranium to just over 5,000. It also consented to transform several controversial facilities to meet Western demands to weaken Iran’s nuclear capacity.

In return, the United States and its partners agreed to suspend their international sanctions over a period of years. They’re also tacitly accepting that the Non-Proliferation Treaty grants Iran the right to enrich nuclear materials for power and medical treatments.

If the bottom line is nuclear security, this agreement is a big winner.

U.S. intelligence agencies — all of them — agree that Iran ceased all weapons-related nuclear research over a decade ago. And now, under the agreed-upon terms, it would take at least a year for Iran to enrich enough uranium for a bomb.

Even then, as my friend Stephen Myles quipped, “they’d still, ya know, have to build a bomb, figure out a way to hide it all from the inspectors all over their country, and convince the international community to sit idly by for one whole year.” 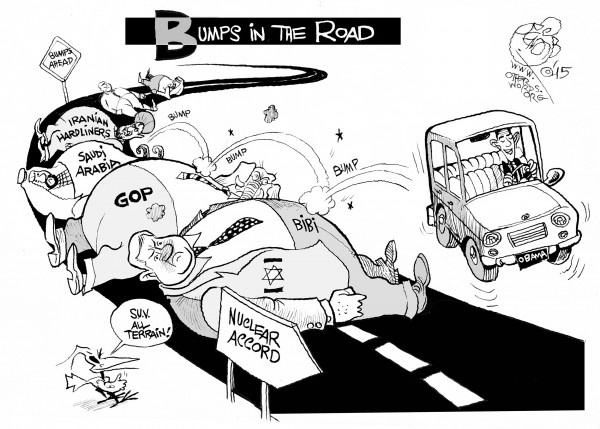 Bumps in the Road, an OtherWords cartoon by Khalil Bendib

That’s just not going to happen.

Yet there’s more at stake here than sanctions and centrifuges. If the agreement holds, it could lead to a real breakthrough for peace in the Middle East.

If Washington and Tehran can maintain normal — even if not chummy — diplomatic relations, a whole host of thorny problems become easier to resolve. Joint efforts to end the fighting in Iraq, stop the catastrophic escalation underway in Yemen, and create a real international diplomatic campaign to end the Syrian civil war would all become possible.

Extremists in both the United States and Iran oppose the accord.

Iran’s Supreme Leader supports the deal, so hardliners there have been quiet. That means the biggest threat to the agreement succeeding comes from the pro-war faction in the U.S. Congress — mainly, but not only, Republicans.

Senator John McCain of Arizona, for example, urged Israel to “go rogue” and attack Iran. And other lawmakers, following their infamous letter to Iran threatening to undermine any agreement, continue to lead efforts to impose new sanctions. What they really want is a chance to tank the accord.

They’re loud, but they’re on the wrong side of public opinion.

A Washington Post poll conducted before the agreement was struck found 59 percent support for a negotiated settlement. A full 70 percent of liberals, two-thirds of Democrats, and at least 60 percent of moderates and independents all favored a deal.

Even Republicans — divided more or less evenly — are far more supportive than their party’s warmongering members of Congress.

To ensure the agreement holds, it will be crucial for supporters of diplomacy to mobilize that public support, strengthen the backbone of wavering members of Congress, challenge extremist positions in the media, and most of all, warn all Americans of the consequences of failure.

Diplomacy defeated war in Lausanne. Now we’ve got to protect the peace.

Phyllis Bennis directs the New Internationalism project at the Institute for Policy Studies (IPS-dc.org). An earlier version of this piece appeared at fpif.org.
Distributed by OtherWords.org.