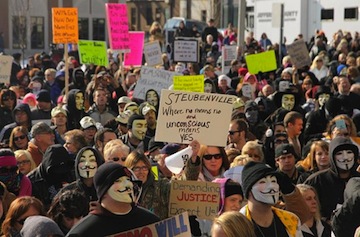 From HBO's "Girls" to CNN's coverage of the Steubenville case, it's time for people to start talking about rape in a more productive way.
By Alana Baum | March 27, 2013

Usually when I’m angry about something, my first instinct is to write. And while I’m furious about what happened to that 16-year-old girl in Ohio, I’m hesitant to lend more ink to the topic, because every additional word adds to the explosive media gossip-fest this has become.

But if we’re going to stop having more Steubenvilles, people have to start responding to the current tragedies with more than just passivity, victim-blaming, and claims like, “I’m tired of hearing about rape.”

HBO’s Girls — a show I normally revere for its unparalleled ability to get my generation talking about sex in long-overdue ways — recently featured a scene in which Adam (a grungy, aggressive, yet mostly adorable weirdo) pressured his new girlfriend Natalia into having rough nonconsensual sex.

Even I, with my feminist education and anti-rape activist badge, was too taken aback at first, too cautious of the absence of a verbal “no” from Natalia, to call this display of sex what it was: nonconsensual.

For the whole duration of the scene, she had a look of bewilderment and fear on her face. It was clear that she neither enjoyed, nor consented to, Adam’s display of power and control. But he didn’t even stop to notice.

Why is it the responsibility of women and girls to avoid being raped? I’m sick of being told to walk with friends at night, keep an eye on my drink, and say “no” loudly and clearly if my boundaries are threatened or violated. Yes, I do all of these things. But the point is that I shouldn’t have to.

Society has yet to hold men accountable for their responsibilities in preventing this all-too-frequent atrocity. Although two of the perpetrators in Ohio were convicted, their football coach covered up his players’ actions, the school administration has yet to fire this coach for his compliance, and CNN correspondents lamented the impact these boys’ sentences will have on their futures. Why, in the aftermath of tragedies like these, is it up to women to raise a red flag? When will men start talking about their role in ending this epidemic?

One of the men who has spoken out powerfully against rape is artist and activist Henry Rollins, who blogged about the Steubenville case. His most salient point was that our obsession with the sensationalism of this horrific story has upstaged our need to discuss why it even happened in the first place.

In discussing Rollins’ article, a male friend of mine posited, “That’s the systemic issue to me, the split between those who are so entrenched within this system of abuse that they are shocked and appalled that a 16-year-old girl would ever be raped, and those who see this headline and think, ‘are we really just now trying to stop this?'”

To the millions of shocked observers, to whom the Steubenville case represents an isolated instance of abuse, it’s way past time to remove your rose-colored glasses. And no, you can’t put them back on again when the headlines stop running. Because without a social transformation, rape isn’t going away.

This issue has been shrouded in silence for far too long. We can’t wait for another politician to fumble or another high school athlete to Instagram his own heinous crime for us to deal with rape. Until we stop being passive actors in this violence, the real people getting life sentences for rape, as Rollins noted, are the survivors.

Alana Baum is an undergraduate at the University of California, Berkeley, and an OtherWords intern at the Institute for Policy Studies. OtherWords.org