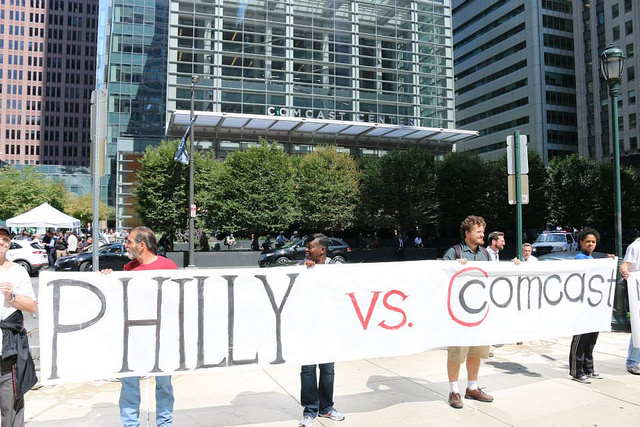 A bigger Comcast harms communities of color — and everyone else.
By Mary Alice Crim | April 15, 2015

Comcast’s gleaming tower soars over its hometown of Philadelphia. The cable giant’s presence in the city is palpable.

You’d like to believe that the company would have a sense of what’s going on in its backyard — and what its neighbors need. But Comcast isn’t paying its fair share or supporting its city.

In the shadow of Comcast Center, Philadelphia schools are cash-strapped. Poverty rates are high. And broadband subscriptions are low.

According to the Philadelphia Inquirer, the city has one of the nation’s worst broadband-adoption rates, ranking 23rd among the 25 largest U.S. cities — even though Comcast is the nation’s biggest broadband provider.

Talk to a Philadelphia resident about any of this and it’s easy to see why Comcast is one of the most hated companies in America. And if Comcast is successful in its bid to take over Time Warner Cable, the experience of Philadelphians will likely be replicated across the nation.

Known for its frequent rate hikes and poor customer service, Comcast wants to buy Time Warner Cable to control even more of the nation’s broadband market. This deal would make Comcast one of the most powerful media companies ever, with unmatched capacity to raise prices, squash competition, and control the future of the Internet. 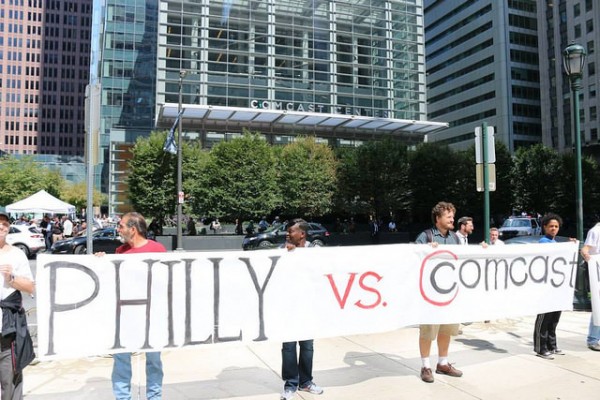 If this mega-merger goes through, Comcast’s service area would cover almost two-thirds of U.S. homes. In many of these communities, it would be the only option available for both broadband and cable service.

Without competition, customers would end up paying more — possibly a lot more, given Comcast’s track record. And given the company’s expanded reach, it would have the power to dictate terms and prices across the industry.

It gets worse: The deal would also enable Comcast to serve as an online gatekeeper. That’s scary, considering its opposition to Net Neutrality and its incentive to promote its own content — the company also owns the media empire NBCUniversal — over everyone else’s.

Giving one company this kind of control over the Internet would hurt all of us. But it could have particularly grave impacts for people of color.

Mainstream media outlets often get the story wrong, air racist programming, and fail to cover issues of importance to communities of color. The Internet, in contrast, enables people to tell their own stories, organize, and access accurate news and representations of their communities.

So it’s no surprise that important leaders in the Latino community are speaking out against the Comcast takeover.

In a recent interview with Salon, Representative Tony Cárdenas, a California Democrat, noted that the merger would “crush the diversity of voices in this country.”

The stakes are high for this community: The merger would make Comcast the sole cable and broadband provider available for up to 90 percent of Latinos. This is especially problematic given that Comcast owns Telemundo and in some U.S. markets has pushed other Spanish-language competitors off the cable lineup.

A bigger Comcast harms communities of color — and everyone else. And that’s why grassroots activism is growing in opposition to this deal.

Weigh in today: Sign my organization’s petition at freepress.net.

Mary Alice Crim is the field director for Free Press. If you would like to express your opposition to this proposed merger, sign a petition at FreePress.net
Distributed by OtherWords.org.