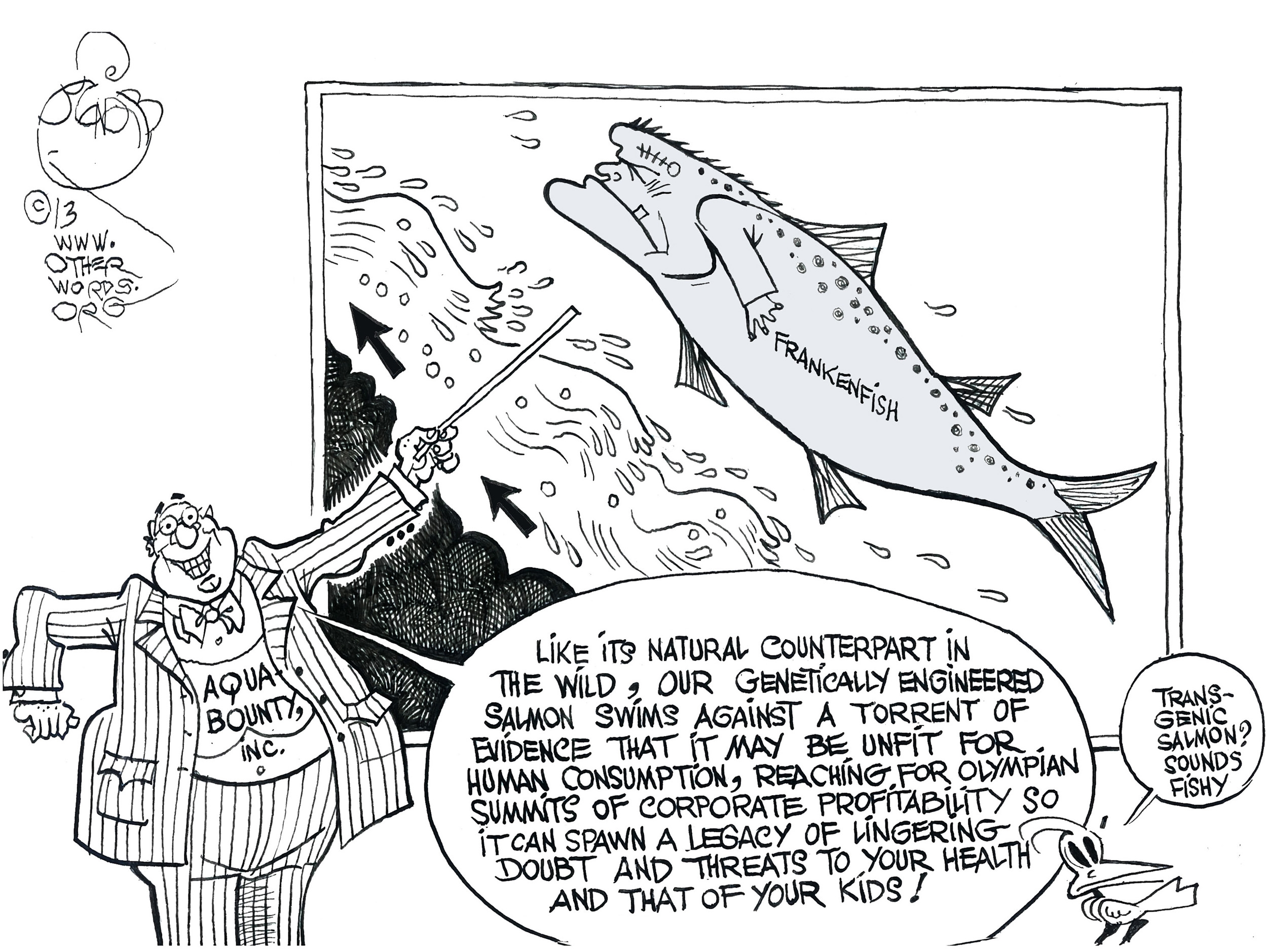 Don’t Put a Fork in It

Despite consumer opposition, the FDA is one step away from approving genetically engineered salmon.
By Wenonah Hauter | January 30, 2013

While most Americans were enjoying the holiday season or stressing out over the nation’s imminent leap off the so-called fiscal cliff, the Food and Drug Administration delivered some big news as quietly as possible.

On December 21, the agency announced that AquaBounty’s genetically engineered salmon had cleared the final hurdle before clinching FDA approval.

Despite insufficient testing and widespread consumer opposition, AquaBounty’s food experiment is dangerously close to becoming the first genetically engineered animal produced for human consumption. Yes, a newfangled fish may soon land on a dinner plate near you.

For those who have been following this news for the past several years, the timing of the FDA’s release of its draft environmental assessment — the Friday before Christmas — was no surprise. But the news was still frightening: The FDA may give this transgenic animal the green light under a new approval process that treats the fish as an “animal drug.”

Prefer your salmon without those eel genes spliced into its DNA? Pay close attention because this frankenfish may hit the market without any sort of label.

It seems that AquaBounty and the FDA don’t believe consumers deserve the right to know whether the fish we eat is genetically engineered. Those who have demanded labeling for genetically engineered food will be unable to identify this transgenic salmon from standard farm-raised varieties. 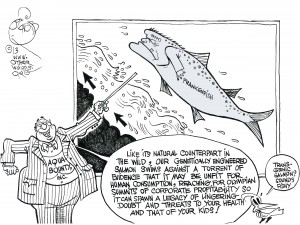 Not only does this ignore our fundamental right to know what we are putting on our plates, it’s also a bad business decision. It’s entirely possible that many Americans will avoid purchasing any salmon for fear it is genetically engineered.

AquaBounty, the biotech company responsible for bringing us this fishy salmon, used its own data to convince the FDA that it is safe to eat. But AquaBounty’s profits are inextricably linked to approval of this salmon. It’s outrageous that the FDA would take AquaBounty’s word over that of dozens of lawmakers and scientists, including experts at the National Oceanic and Atmospheric Administration and the Fish and Wildlife Service, not to mention thousands of concerned consumers.

The FDA has the difficult task of protecting consumer safety, but it’s hard to take it seriously when it comes to genetically engineered salmon. So far, they’ve failed to conduct the appropriate studies to determine if the fish is safe to eat. Independent scientists have skewered the FDA’s process, noting that serious environmental concerns have not been examined while food safety issues related to hormone levels and allergies have been glossed over.

Even AquaBounty’s claim of faster growth rates is suspect. The company hasn’t yet demonstrated that its transgenic salmon can grow faster than salmon without its new traits. And that’s the whole reason they say it should be approved. SalmoBreed AS, a Norwegian company specializing in the selective breeding of Atlantic salmon, has directly challenged AquaBounty on this point.

By releasing an environmental assessment instead of a more thorough environmental impact statement, the FDA has failed to fully consider the threat this controversial new fish could pose to wild fish populations.

While the FDA is close to approving genetically engineered salmon for consumers, Congress can still keep them from unleashing this dangerous experiment. Consumers don’t have million-dollar accounts with K Street lobbyists, but we do have a powerful voice of opposition, one that has effectively put the brakes on this untested laboratory experiment for more than two years. Members of Congress are speaking out against this controversial fish. Let your elected officials know you don’t want this frankenfish on your plate. Visit Foodandwaterwatch.org to find out how.