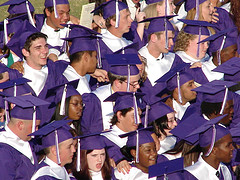 Don’t Squat in Your Spurs or Be an Idiot

As the ceremonial yakker, I urged new grads to work for the common good.
By Jim Hightower | June 18, 2013

June is the month of the summer solstice and America’s biggest blizzard.

I don’t mean a weather event blowing in from the Arctic, but a merciless storm of words blowing from the mouths of commencement speakers at high school and college graduations.

This year, I was one of the blowhards, speechifying before some 260 graduates of my old high school in Denison, Texas. While it was an honor to be chosen as their ceremonial yakker, it was also truly humbling.

Commencement pontificators are expected to offer some sage advice to guide the grads, and I was all out of sage. So, I resorted to three admonitions I once learned from a West Texas cowboy:

Never squat with your spurs on.

Always drink upstream from the herd.

Speak the truth — but ride a fast horse.

Then I hit them with my main message: Now that you’ve had a dozen years in the classroom and earned this important credential, don’t be an idiot!

I used “idiot” in the same way that ancient Greeks originally meant it. Idiotes were not people with low-watt brains, but individuals who cared only about themselves, refusing to participate in public efforts to benefit the larger community — the common good. The Greeks, I told the students, considered such people selfish, contemptible, and stupid. And so should we.

The encouraging news is that this crop of graduates from Denison High nodded in agreement. After all, they’ve seen that idiots are running things in Washington and on Wall Street. And this generation of youngsters seems to be hungry for less selfishness and more togetherness as our society’s guiding ethic.

So commence, I said — and make it happen!