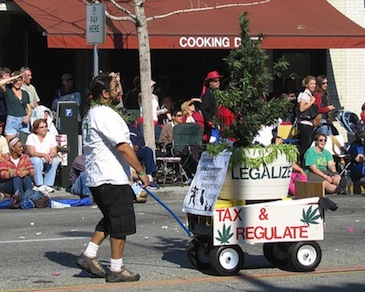 How would Coloradans have voted on a school tax that would only collect more revenue from the super rich?
By Jason Salzman | November 13, 2013

That was the Denver Post’s lead headline the day after two-thirds of Colorado voters defeated a ballot initiative that would have raised the state’s income tax to fund K-12 public education.

The funny thing is, the pot tax is also a school tax. About half the taxes generated from Colorado’s legalized marijuana sales will go toward building new schools. The rest will cover pot regulation costs.

The pot measure will place a 10 percent and 15 percent tax on retail and wholesale marijuana sales, respectively.

The school tax would have raised tax rates from 4.63 percent to 5 percent on incomes up to $75,000, and to 5.9 percent on incomes higher than that threshold. Colorado has a flat income tax that’s the same no matter how much someone earns.

With the tax increase, families earning the median income of $57,000 would pay an additional $133 per year.

And how much more tax would the median Colorado family pay under the new pot tax? Zippo, because most don’t buy marijuana.

You’re tempted to say that Coloradans are unabashedly selfish, unwilling to chip in an average of $133 measly dollars more to the school system.

But they’re willing to force their pot-loving neighbors to foot that bill. Just as long as they don’t have to pay up.

On the other hand, it’s understandable why some Coloradans would say no to a proposal that imposes additional taxes up and down the income ladder.

Yes, the income tax hit richer people harder, but why should it hit your average income earner at all?

Maybe the results of Colorado’s election say that voters are tired of the pervasive income disparity clearly visible everywhere in America. So they decided they’d rather be selfish than pay even part of a bill that they feel rich people and rich corporations should be taking care of.

But that’s what’s become of inequality in America: The middle class is so financially stressed that folks won’t fork over $133 more every year, even if it does help schools.

I can’t cite a poll to prove my point here, because the question wasn’t asked of Colorado voters.

The school tax proponents blamed the overwhelming loss on people’s anger toward government itself, coming on the heels of the government shutdown and the Affordable Care Act’s website woes.

But Colorado just got through massive flooding as well, and both the state and local government performed beautifully, showcasing why collective action is essential and how well it can work.

So what happened in Colorado on Election Day?

The rich continue to do well while average people hurt. It seems that this combination is enough to kill any middle-class tax increase.

Maybe the solution is to propose an income tax increase only for the rich, giving average folks the chance to fight back with their votes against the inequality that confronts them everywhere they go.