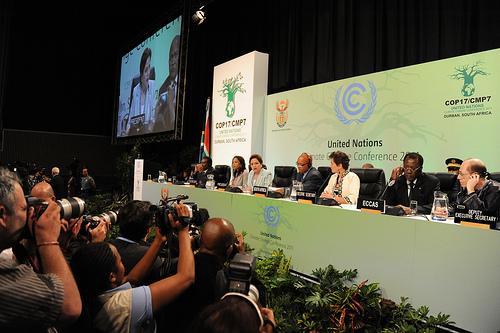 Delegates at COP17 have presented different visions of how the Global Climate Change fund will work. Photo by UNClimateChange.

We have to mobilize the political will of rich countries to share the wealth.
By Janet Redman | November 29, 2011

A major flashpoint at the UN Climate summit in Durban is how nations in the global north should deliver the money that they’re supposed to give countries in the global south to support efforts to deal with climate change. 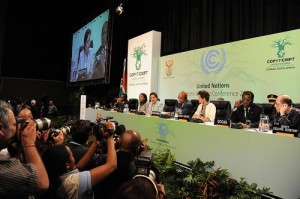 Delegates at COP17 have presented different visions of how the Global Climate Change fund will work. Photo by UNClimateChange.

It’s not chump change. The UN Department of Economic and Social Affairs says it will cost developing countries upwards of $1 trillion every year to address climate change in the coming years.

Many negotiators want the UN to open the doors of the Green Climate Fund created at last year’s summit in Cancun. They’re also debating the scale and sources of long-term finance. The U.S. government is blocking both conversations.

Instead, Washington wants the private sector to take a leading role, and for tricks like carbon trading to leverage public money by raising big bucks in the financial market. This might sound good, but it would just add another roulette wheel to the casino economy that plunged the world into the worst recession since the 1930s.

Therefore, civil society groups and developing–country governments have demanded that the Green Climate Fund not serve as yet another game room for financial speculators to gamble with public dollars. A growing movement for innovative sources of climate finance — including a tiny tax on financial transactions — has shown that money is available for global public goods like climate change programs.

Now we just have to mobilize the political will of rich countries to share the wealth. With European countries adopting austerity measures, and a U.S. Congress that barely believes that the climate is changing, that’ll be an uphill, but necessary, struggle.

Will the next two weeks of climate negotiations unleash a violent storm that makes our planet uninhabitable? Or can governments come together to keep our future safe?

As the second day of climate talks are winding down, storm clouds are building again.

Janet Redman, co-director of the Sustainable Energy & Economy Network at the Institute for Policy Studies, is observing the United Nations climate talks in Durban, South Africa. www.ips-dc.org
Join the global call for climate justice by participating in 1,000 Durbans in conjunction with the December 3rd Day of Action on Climate Justice.