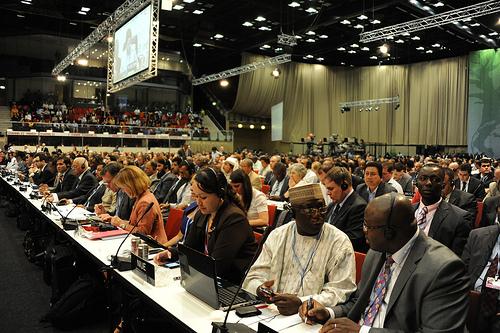 There's a stormy backdrop as delegates from around the world prepare to discuss the future of the world. Photo by UNClimateChange.

Scientists are finding increasing evidence that climate change is behind the recent surge in extreme weather.
By Janet Redman | November 29, 2011

On Sunday night, as I met with colleagues from Africa, Asia, Europe, and Latin America to prepare for the UN climate summit, the unseasonably blustery evening went from windy to rainy to a huge downpour.

It was a perfect illustration of why we were in Durban, South Africa. Scientists are finding increasing evidence that climate change is behind the recent surge in extreme weather. By the time we ran (literally) down the block for dinner the rain was hard enough to soak us in spite of raincoats and umbrellas. 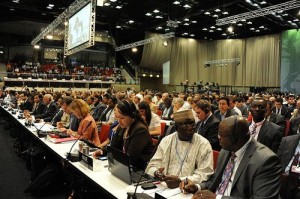 There’s a stormy backdrop as delegates from around the world prepare to discuss the future of the world. Photo by UNClimateChange.

We woke Monday morning to news that the violent storm had killed eight people in Durban and neighboring Pietermaritzburg, and destroyed scores of houses. The security guards that checked our badges at the door reported that local farmers’ crops were ruined. It was the second deadly deluge in the KwaZulu-Natal province in less than two weeks.

This is a big part of why I’ve made the carbon-spewing trip from Washington DC to South Africa.

Over the course of this yearly summit, I’ll advocate for rapid and deep cuts in climate pollution from the world’s wealthy industrialized countries. I’ll also call for financial support for poorer countries to move from dirty development pathways to low-emission strategies for lifting people out of poverty (like access to clean, renewable energy), and to build resilience to the impacts of climate change, like extreme weather-related disasters.

Janet Redman, co-director of the Sustainable Energy & Economy Network at the Institute for Policy Studies, is observing the United Nations climate talks in Durban, South Africa. www.ips-dc.org
Join the global call for climate justice by participating in 1,000 Durbans in conjunction with the December 3rd Day of Action on Climate Justice.