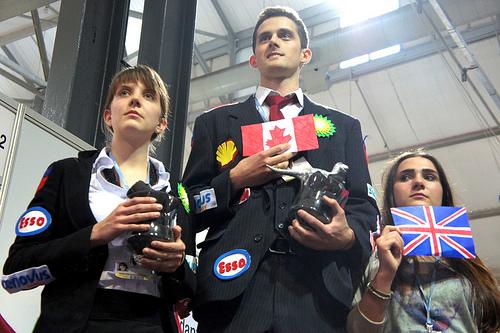 Activists warn that the wealthiest countries are not negotiating in good faith at Durban. Photo by adoptanegotiator.

Durban Diary: What’s on the Table?

Many countries -- especially the wealthiest ones -- are dragging their feet.
By Janet Redman | November 29, 2011

There are hundreds of issues and interests at stake at the 2011 UN climate summit, as well as representatives of the 192 countries who signed the UN Framework Convention on Climate Change in 1992. But just two questions are on everyone’s mind.

The first is whether the Kyoto Protocol will survive. The second is whether the world can agree on a climate finance system. Climate finance is the term we’re all using for the money promised by developed countries to support developing countries as they adapt to a warmer world and shift to low-carbon development pathways. 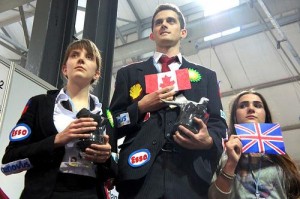 Activists warn that the wealthiest countries are not negotiating in good faith at Durban. Photo by adoptanegotiator.

The Kyoto Protocol, adopted in 1997 and enacted in 2005, is the only international, legally binding treaty regulating climate-warming pollution.

We’re still in the pact’s first “commitment period.” For this phase, most developed countries (the recalcitrant United States didn’t join) promised to reduce their emissions by 5 percent by the end of 2012.

That deadline is rapidly approaching. If countries don’t agree to the second commitment period, which is slated to begin in 2013, there’ll be nothing to keep global emissions from shooting through the roof.

But instead of getting behind a second commitment period, countries — especially the wealthiest ones — are dragging their feet.

Canada, Russia, and Japan say they won’t sign up unless emerging economies like China take binding regulations. China says it shouldn’t have to take mandatory cuts until the biggest polluter — the United States — shows any evidence of that it’s reducing emissions or taking steps in that direction. And Washington flat out admits that it will never sign the Kyoto Protocol.

U.S. climate negotiators say the world needs a new mandate. The Obama administration is proposing that the world move to a “pledge and review” model. It would allow countries to volunteer goals for cutting emissions. A couple of years later, world leaders would convene to see if anything’s happened. There’d be no overall target that lines up with what scientists say is necessary, no repercussions if countries don’t meet their goals, and no distinction between countries that are most responsible for creating the climate crisis and those that are primarily its victims.

This flies in the face of the “polluter pays” principle that we all learn in kindergarten – if you made the mess, you have to clean it up. It’s also simply suicidal.

Social movements, environmental groups, trade unions, development organizations, human rights advocates, and youth activists — all the folks that will be most impacted by global warming — have made clear that inaction is not an option. “Governments are playing games with us while people are dying,” said Desmond D’Sa, chair of South Durban Community Environmental Alliance, which helped organize an alternative summit called the People’s Space being convened at Durban’s University of KwaZulu Natal.

Developed countries made a commitment to reduce their emissions when they signed the UN climate convention. The mandate is there. It’s clear. Now it’s time for those countries, which grew wealthy exploiting cheap but dirty fossil fuels, to fulfill their promise.

Join the global call for climate justice by participating in 1,000 Durbans in conjunction with the December 3rd Day of Action on Climate Justice.