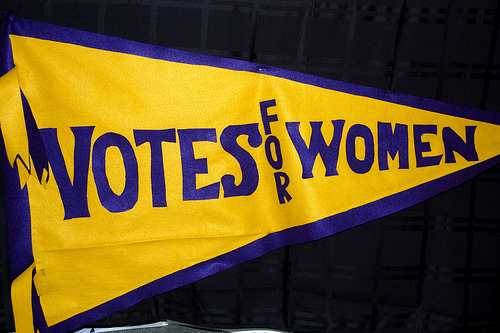 League of Women Voters of California/Flickr

This Election Puts Women in the Driver’s Seat

Female voters could tip the balance for Democrats in several high-profile Senate races that Republicans are counting on for majority control.
By Martha Burk | September 10, 2014

In a year when abortion restrictions were piled on at the state level, the Supreme Court ruled that corporations can deny employees birth control coverage, and equal pay legislation was stymied in the Senate by a Republican filibuster, this demographic reality could boost female Democratic candidates and spell trouble for Republicans up and down the tickets. 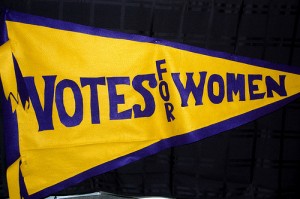 League of Women Voters of California/Flickr

Female voters could tip the balance for Democrats in several high-profile Senate races that Republicans are counting on to take back the majority. Michelle Nunn, running in Georgia as a moderate who can mend fences, has a commanding lead with women (polls show that women favor her over GOP opponent David Perdue by a 52 percent to 34 percent margin) and could flip the seat being vacated by Republican Saxby Chambliss.

The picture isn’t so clear in Kentucky, where incumbent Mitch McConnell leads Democratic challenger Alison Lundergan Grimes by four percentage points overall, while Grimes tops him with women by seven points. However, when asked which candidate would improve the lives of women, respondents chose Grimes by a 21-point margin.

Likely voters with an income of less than $40,000 (undoubtedly mostly female, since women are the majority of low earners) favored Grimes by 17 points.

One race where women could, but might not, make a difference is the contest for governor of Texas. Democratic state senator Wendy Davis rocketed to national prominence last year when she mounted an 11-hour filibuster against punitive abortion restrictions (which later passed).

Curiously, despite more than 20 abortion clinic closings in Texas in the past few months and ongoing legal challenges by women’s groups, Davis has generally shied away from the issue that made her famous before she got on the campaign trail. Urging her early on to move abortion rights to the top of her agenda, the Texas Observer pointed out that a key group in 2014 will be suburban women who vote in high numbers and tend to support Republican candidates.

And those women are some of the strongest abortion rights backers in the Lone Star state’s electorate, with 44 percent believing that abortion should always be accessible.

Trailing anti-abortion opponent Greg Abbott by 18 percentage points in the latest poll, Davis broke her near-silence in a dramatic way in early September. She released a campaign memoir with poignant language revealing that she has had two abortions, both for compelling medical reasons. No polls have emerged since the revelation, but she’s been labeled “abortion Barbie” by opponents before. Whether the tactic will be seen as a dirty trick now is anybody’s guess.

These three races notwithstanding, there’s a big question as to whether the Republican “War on Women” tarnished the party so much with female voters in 2012 it can’t recover enough to tip the balance in 2014. Democrats have made sure women haven’t forgotten about gaffes from past candidates about “legitimate rape” and how pregnancy from rape is “something God intended.”

And then there’s the much ridiculed effort to educate candidates on how to talk to women — you know, speak to them like your wives and daughters. This is no change in policy, mind you, just a campaign that’s clumsily pandering to women.

And it’s no secret that women have been deserting GOP for years. More women have registered as Democrats than Republicans since 1972, and the 2012 presidential election produced the largest gender gap in history. It doesn’t look like anything has changed.

A detailed report recently commissioned by two major Republican groups concluded that female voters view the party as “intolerant,” “lacking in compassion,” and “stuck in the past.”

Still, most pollsters are rating the chances of the Republicans winning a Senate majority in November as a tossup. If women get together, turn out strongly, and vote their own interests, the GOP will have nothing to celebrate on Election Day.