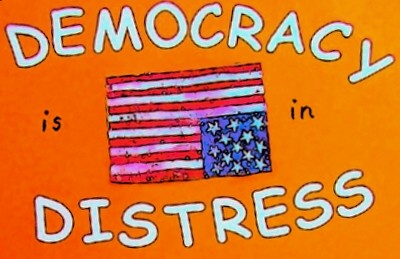 Winning Elections by Hook or by Crook

Our electoral process doesn't fit within the traditional definition of "democracy," so we're changing the definition.
By William A. Collins | February 5, 2014

The chance to win
Seems so remote,
When the Man decides
Who gets to vote.

Political operatives are running websites with smiling photos of Democratic candidates as part of a fundraising campaign. But there’s a catch: They’re asking for money to defeat these candidates.

Yes, that’s rather unusual. After being exposed as the perpetrator of this deceptive maneuver, the Republican Congressional Campaign Committee (RCCC) has agreed to refund donations to Democrats fooled by its misleading ads.

And politicians wonder why voters don’t trust them.

Despite this nod to civility, it may be too late to save the RCCC’s reputation or our supposedly sophisticated democracy.

Given all those millionaires in Congress, continuing to call the United States a representative democracy requires some twisting of the old definition. But hey, that’s the nature of our evolving language.

And while electoral disorders aren’t a new problem for the United States, the two dominant political parties have changed places.

In the Jim Crow days, Republicans were the champions of civil rights. Now, they’re the ones out to restrict voting. They prefer certain categories of folks to stay home: the poor, the black, the Latino, the LGBT community, the disabled, and the female. For some reason, each such group has shown an unsettling proclivity to lean Democratic.

In case you are tempted to believe that this type of election rigging is a recent phenomenon, please recall the original Constitution which only allowed only white male property owners to vote. And you know the unwavering position of modern Republicans: If it was good enough for the Founding Fathers, then it’s good enough for them.

Thanks to those new restrictive voting laws, every election brings bizarre tales of ballot-box drama. Former Democratic Speaker of the House Jim Wright was nearly barred from voting last year. The 90-year-old let his ID expire, and, you know, rules are rules.

Along similar lines, some states don’t allow felons to vote, or else require a Kafkaesque process to gain registration. These restrictive rules, coupled with the common police practice of racial profiling, suppress minority voting. You see, blacks and Latinos are arrested far out of proportion to their numbers in the population and equally out of proportion to their commission of crimes.

But money is really the biggest factor here, and the Republicans happen to have plenty of it. Since money has a profound effect on electoral outcomes, there are limits on how much can be donated to candidates and parties.

Not surprisingly, the GOP works tirelessly to repeal, undermine, and rewrite such rules, and to eviscerate the public agencies that enforce them. The Republican-leaning Supreme Court lends a hand where it can, which is often.

By now, the concept of a “free and fair” election has become charmingly quaint.