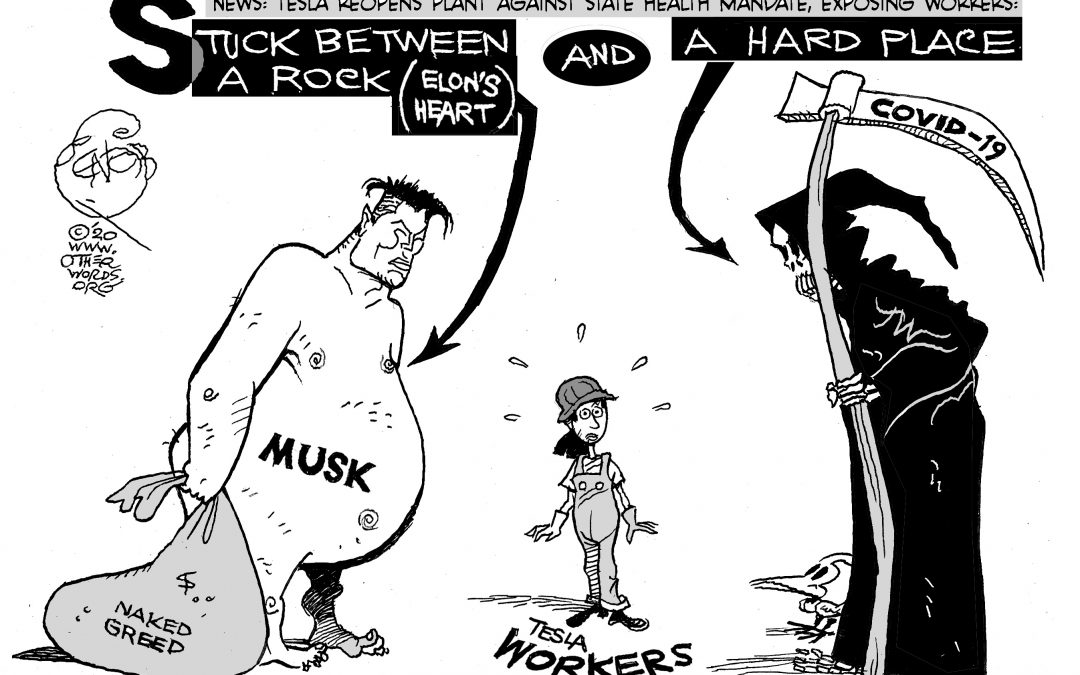 Elon Musk and the Billionaire War on Public Health

The billionaire Tesla CEO made hundreds of millions more by illegally forcing his employees back to work in a pandemic.
By Sam Pizzigati | May 20, 2020

“This is fascist. This is not democratic. This is not freedom,” Musk stormed in an April 30 conference call. Not long after, Musk announced his Fremont plant would reopen — with him in it. “Tesla is restarting production today against Alameda County rules,” Musk tweeted. “I will be on the line with everyone else. If anyone is arrested, I ask that it only be me.”

Nobody arrested Musk. Nobody stopped the workers streaming into his plant either, despite Tesla’s notorious disregard for safety standards.

The workers didn’t have much choice. If they didn’t return, a Tesla email informed them, they would go on “unpaid leave” status. They could also, Tesla threatened, find themselves losing their state unemployment benefits.

Musk had, in effect, forced Tesla workers into the same lose-lose bind that faces meatpacking workers in states like Nebraska. Return to work, put your health in jeopardy, and make your rich employers richer or shelter in, keep yourself and your family safe, and go hungry.

America’s billionaires, Musk has demonstrated, can do whatever they want. They stand above the law. But why did reopening that plant matter so much to Musk?

We don’t have to guess why. We just need to look at the pay deal Musk brokered with Tesla a bit over two years ago. This March 2018 deal lavished Musk with stock option awards on the condition that he meet a series of ambitious goals to increase the company’s market capitalization.

If Musk meets those goals, one trade journal noted, the deal could make him “the richest man in the world by a massive margin.”

So for Musk, this spring’s pandemic shutdown couldn’t have come at a more inopportune time. The company was just ramping up its new Model Y sport utility vehicle. Without a successful Model Y, Tesla’s share price could tank, and Musk could lose out on the biggest executive pay windfall in global corporate history.

The Tesla shares, in the end, didn’t tank. Musk’s all-out offensive against California public health officials — and his enthusiastic willingness to subject Tesla workers to the pandemic — stiffened the spine of Tesla investors. Musk met his pay deal’s initial benchmarks and saw his personal wealth jump by $700 million.

Even before the planet reopened, Musk already ranked as the country’s No. 2 billionaire “pandemic profiteer,” the Institute for Policy Studies reported — behind only Jeff Bezos.

Should the rest of us care about any of this? Only if we value the difference between democracy and real-life fascism, a difference that Musk so recklessly clouded when he hollered “fascist” at public health officials just trying to keep Americans safe.

Musk’s successful bullying has vividly revealed that our duly elected leaders and the governments they lead cannot, when push comes to shove, adequately safeguard the health and well-being of average working people.

Democracy cannot work particularly well — or endure particularly long — when those we elect cannot protect us from the wealthy and powerful who loom large so high above us. Fascism, by contrast, feasts on such moments.

Sam Pizzigati co-edits Inequality.org for the Institute for Policy Studies. He’s the author of The Case for a Maximum Wage
and The Rich Don’t Always Win. This op-ed was adapted from Inequality.org and distributed by OtherWords.org.