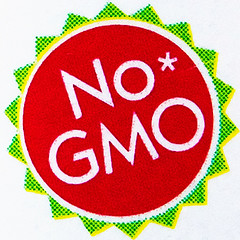 In 64 other countries, you can already find out whether what you're eating contains genetically modified ingredients.
By Shireen Karimi | October 2, 2013

One hundred calories per serving, two servings per container, three grams of fiber, product of USA, may contain traces of soy, manufactured in a facility that processes wheat.

We’re accustomed to seeing labels on our food that give us this information. However, there’s one detail you’ll find on food labels in 64 countries that you probably won’t find here in the United States: whether something you’ll eat contains genetically engineered ingredients.

According to the World Health Organization, these newfangled foods are “organisms in which the genetic material (DNA) has been altered in such a way that does not occur naturally.” The process of creating these foods involves injecting the gene of one species into the DNA of another species.

Currently, there’s no scientific consensus on the benefits or risks of engineered foods, but a trio of studies should give us pause.

In June, Australian researchers published a study in the peer-reviewed Journal of Organic Systems showing that pigs fed a diet of engineered corn and soy suffered from severe stomach inflammation when compared to pigs given traditional feed.

Two years ago, a study by Canada’s University of Sherbrooke Hospital Centre found the Bt toxin, a pesticide injected in the DNA of genetically modified corn and cottonseed, circulating in the blood of pregnant women and their fetuses, as well as non-pregnant women.

Earlier this year, Brazilian researchers reported in the Journal of Hematology & Thromboembolic Diseases that the Bt toxin can cause blood abnormalities from anemia to leukemia in mammals, “increasing their toxic effects with long-term exposure.”

Many people assume the Food and Drug Administration (FDA), the federal regulatory body for engineered foods, would only allow them if they had been proven safe for humans to eat. However, these genetically modified organisms have never been proven safe for consumption.

Often, the same people are regulating and developing these newfangled foods. Several high-level employees at the FDA have also worked for food-industry corporations vehemently opposed to this kind of labeling. Most notably, Michael Taylor, the FDA’s deputy commissioner for foods, is a former vice president of Monsanto, the biggest player in the genetically modified food business.

Since the jury’s still out on the true safety of these ingredients, doesn’t it make sense for consumers to decide for ourselves if we want to eat them or not? Many companies that sell unlabeled genetically modified foods in our own country sell the same products in Europe — where labeling is required by law — either without including these ingredients or just saying so on the label.

If Big Ag can do this for its customers in Europe, why can’t it offer the same service for U.S. consumers?

Now, a heated battle in Washington State over a labeling initiative is headed for a vote in November. Biotech, agribusiness, and food manufacturing companies are spending millions to defeat the initiative. In California, where Big Ag outspent labeling proponents by 5 to 1, voters rejected a similar labeling initiative by a narrow margin last year.

The deep-pocketed companies fighting labeling efforts argue that having different requirements in different states would be costly and confusing. Certainly, a unified federal labeling requirement would be better. Rep. Peter DeFazio (D-OR) in the House of Representatives and Sen. Barbara Boxer (D-CA) in the Senate have both introduced bills that would accomplish that goal.

Both bills have bipartisan support. If they pass, we’ll see a little more text on our packages of food. We’ll also know what we’re eating. Isn’t it about time?

Shireen Karimi is Campaign Coordinator for GMO Inside, a program of Green America. GreenAmerica.org
Distributed via OtherWords. OtherWords.org