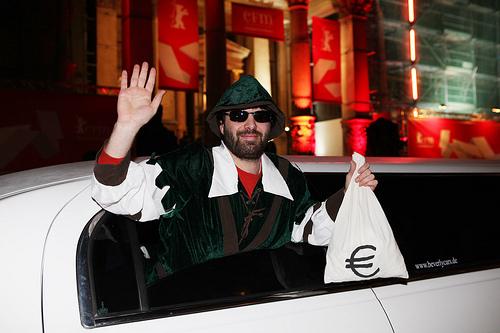 The goofy stunts weren't the only game-changers.
By Sarah Anderson | October 12, 2012

European campaigners for a financial transaction tax have done some awfully goofy things over the past three years. 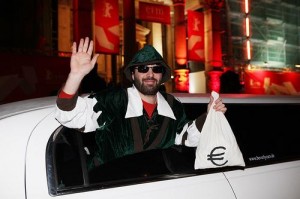 At one French demonstration, they stripped down to their skivvies to emphasize the small size of the tax (0.1% on trade of stocks and bonds and 0.02% on derivatives under the European Commission’s proposal). In Germany, they rented a limo and crashed the Berlinale film festival, dressed as Robin Hood characters. In many countries, they’ve gotten elected officials to pose with silly hats and fake bows and arrows.

But after this week, the opponents of the financial transaction tax (aka Robin Hood Tax) will no longer snicker at such antics. At a meeting of European finance ministers on October 9, 11 governments committed to implementing the tax. This is two more than the minimum number needed for an official EU agreement. And it is a huge victory for those of us — not just in Europe but also in the United States and around the world — who’ve been pushing for such taxes as a way to curb short-term speculation and generate massive revenue for job creation, global health, climate, and other pressing needs.

Of course the goofy stunts weren’t the only game-changers. Campaigners have also built up strong technical arguments about the feasibility of such taxes. And a growing number of financial professionals have come out in support, blunting the industry backlash.

The broader European crisis has also been a major factor. In fact, there are rumors that Italy and Spain may have sold their support in exchange for some debt concessions from Germany. The additional eight governments in the new coalition of the willing are France, Austria, Belgium, Estonia, Greece, Portugal, Slovakia, and Slovenia. More may join in the coming months.

There are still a few hurdles ahead. There will be a round of negotiations that could result in the European Commission’s proposal being watered down by lowering the rates or narrowing the base to only cover securities. There will be a fight to make sure revenues help people and the planet instead of the big banks. And EU heads of state will have to vote by a qualified majority to give the initiative the green light. This means some countries that don’t plan to implement the tax themselves will still need to sign off on it. The biggest opponent, UK Prime Minister David Cameron, may have some obstructionist tricks up his sleeve.

But according to Peter Wahl of WEED, one of the key forces behind the German campaign, “there is now quite a strong political will behind the project, so that we can expect definitive implementation rather soon, perhaps already during 2013.”

Europe’s dramatic step forward can only boost the growing U.S. grassroots efforts for a Robin Hood Tax. Our current Treasury Secretary, Timothy Geithner, has been a naysayer, sometimes even chastising European leaders for considering the idea. But with Geithner heading out the door after the election and Europe moving towards raising revenue off the tax, we may get a blast of fresh thinking.