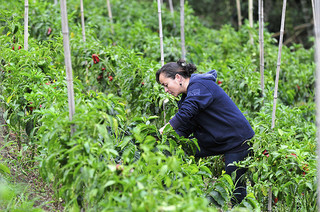 The South American country's recently enacted free-trade deal with the United States is devastating for its farmers.
By Jeanine Legato | September 4, 2013

After shutting down major highways and key trucking routes for nearly two weeks, two million farmers and workers brought the Colombian government to the negotiating table to reform trade policy.

Didn’t know about that? Well, few in the United States are taking note and it’s hardly making our headlines. Yet this may be just the opening salvo in a full-frontal attack on the recently enacted U.S.-Colombia Free Trade Agreement.

While peace negotiations between the Colombian government and FARC rebels continue in an effort to end a brutal, five-decade-long war, a less-publicized problem — a harsh, unbridled free-trade economic system that is devastating farmers — has reached a boiling point.

As many as 2 million Colombians took their protest to the highways of the country in August, met by tens of thousands of members of their nation’s security forces and brutal repression.

Based on reports from the Red Cross and human rights organizations, security forces cracked down on protesters with accounts of forces breaking into farmers’ homes, shooting tear gas from helicopters, firing weapons indiscriminately, and even sexual abuse.

Because of the impact of the protests, which paralyzed the capital of Bogotá, Colombian President Juan Manuel Santos was forced to acknowledge the lack of effective agricultural policy, equating the mass unrest to a “storm” caused by the “absence of agricultural policies for a long time.”

For the protestors, however, it’s not the absence of agricultural policies, but one menacing policy in particular that has them up in arms: the U.S. free trade agreement, implemented last May. The U.S.-Colombia Free Trade Agreement prohibits the very policies the United States uses to prop up Big Ag, such as subsidies. In this unequal playing field, what can Santos do to support Colombian growers and workers?

Take the crisis of the Colombian dairy industry, for example. Faced with a saturation of U.S. dairy products in the Colombian market, farmers gave away or dumped milk in the months leading up to the strike, claiming that production costs were too high to compete with U.S subsidized products. Before the agreement was signed in 2011, Oxfam reported that 1.8 million farmers would see a significant drop in their income in the wake of a free trade agreement with the United States, with 400,000 of the poorest farmers set to lose up to 70 percent of their income.

The sheer desperation of poverty in Colombia’s breadbasket has spurred the mass protest on the commercial byways of Colombia, and neither brutal repression nor offers of band-aid solutions will solve the structural problem. The farmers demanding an end to free-trade policies that failed in their promise to increase prosperity for Colombians are screaming at the top of their lungs that the emperor has no clothes.

Can you hear them now?