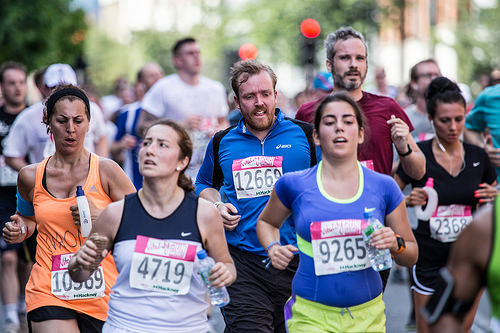 Unless you're in danger of overdosing on exercise, don't eat like it.
By Jill Richardson | July 9, 2014

To most people, “bonking” implies an R-rated activity. To marathon runners, cyclists, and other endurance athletes, it’s something else entirely.

In sports jargon, someone who “bonks” suffers severe fatigue after running out of their stored energy. People who experience the condition, also known as “hitting the wall,” describe it as having “your legs turned to cement.” Some folks hallucinate too. 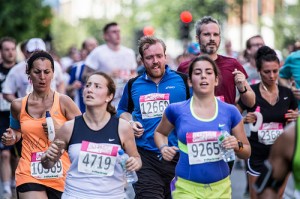 The body stores energy as glycogen, a sugar made up of many glucose molecules. When it’s needed, the body turns it to glucose for some quick fuel. Run out and you’re in trouble.

Once you bonk — as Lance Armstrong famously did during the 2000 Tour de France — you might be able to eat or drink something sugary and keep going, but you might be done for the day. For someone running a marathon, this would be a huge bummer. On a long hike up a mountain, it could be dangerous.

As I train to attempt hiking Mt. Whitney, the tallest mountain in the continental United States, bonking is a concern. My friend’s daughter hit the wall right as she got to the top, a precarious place to spend time due to frequent storms. He practically had to carry her back down the entire 11-mile trail.

Eating on the trail to avoid bonking runs against practically anything you’ve ever heard about nutrition. Skip the protein and fat — stick with carbs. And not those complex carbohydrates that are oh-so-good for you. You need refined carbs, like white flour and sugar.

As your body depletes its energy stores, sugary foods provide the quick, easily accessible energy you need to keep going. Thankfully, there’s no shortage of such foods on the market.

Forcing myself to eat large quantities of what usually counts as junk grates on me, but I take my safety seriously. I use long hikes to indulge in treats I love but normally try to avoid, like cookies. I’m also a fan of bananas and sugary dried fruit. But many athletes turn to products marketed especially for them: sports drinks, energy bars, and even pouches of sugary gel that are appropriately named GU.

Fortunately, most Americans are in no danger of overdosing on exercise. And yet, many still eat like they are.

If you aren’t burning a few thousand calories by engaging in high-intensity exercise for several hours, you have nothing to fear. To put things in context, marathon runners are the most prone to hitting the wall after they’ve run 18 miles or more.

Odds are that many of the 77 million Americans who drink sports drinks are not marathon runners. In fact, only about 19 million of us completed at least one of those 26.2-mile races in 2012.

Little separates some of these products from candy. Take those Snickers Marathon bars on the energy bar shelf of the grocery store. And Jelly Belly markets Sports Beans, labeled as “Energizing” or “Extreme Energizing” jelly beans. (If you’re wondering, the company puts caffeine in the “extreme” ones.)

Sure, these products contain electrolytes in addition to sugar, and you need electrolytes to replace what you lose through sweat. But do you know what electrolytes even are?

Electrolytes include sodium, potassium, calcium, and magnesium, but products like Gatorade typically just include sodium and potassium. You could also get those by eating something salty and a banana.

It’s wonderful that endurance athletes have no shortage of excellent products available to prevent a bonk, but I fear that these sugary foods are doing us more harm than good on the whole.

Or put more simply, they are junk.

Americans will be better off if we steer clear of these sugary energy products except for when we truly need them.