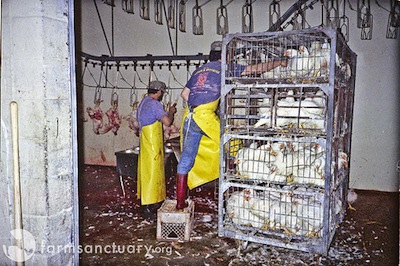 The USDA proposal for poultry plants would make a bad situation worse.
By Tom Fritzsche | September 25, 2013

Oscar was good at his job.

He folded chicken wings at an Alabama poultry plant. As bird carcasses zipped by on the processing line, he twisted the wings into position, folding fast enough to meet a quota of about 40 chicken wings per minute — roughly 18,000 wings per day.

“I did my job well,” he said. “But little did I know I was harming myself in the process. They don’t warn you that this can happen.”

Repeating the same motion thousands of times put enormous pressure on his hands and wrists, and he was eventually diagnosed with tendinitis and carpal tunnel syndrome. When the pain prevented him from keeping up with the processing line, the company fired him.

Oscar’s story is not unusual for the thousands of workers responsible for making the United States the No. 1 poultry producer in the world. 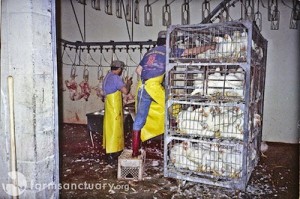 Now, the U.S. Department of Agriculture is poised to make their jobs even more dangerous. The agency has proposed a new inspection system that would allow poultry plants to increase processing line speeds from the current maximum of 140 birds per minute to 175 birds per minute. For workers like Oscar, it means more birds to process, more injuries, and more pain.

Current speeds already have created an epidemic of debilitating workplace injuries. The National Institute for Occupational Safety and Health recently found that 42 percent of workers in one poultry plant had symptoms of carpal tunnel syndrome and related ailments. The focus on speed is so intense that some workers have had to urinate on themselves rather than invite the wrath of a supervisor by leaving the line for a restroom break.

The Government Accountability Office just issued a report criticizing the data used by the USDA to insist on this ill-conceived rule and a similar one for hog slaughterhouses.

Accelerating line speeds is part of the USDA’s attempt to “modernize” poultry production and the inspection process. Currently, USDA inspectors on the processing line determine which birds aren’t safe for consumption. The new proposal hands that duty over to workers who will be more concerned with processing birds, and keeping their jobs, than pointing out potentially contaminated chicken.

Oscar’s experience shows what happens to workers once they have sacrificed their health to their employers. Those who still have their jobs often suffer in silence, enduring pain that continues long after they clock out for the day. It’s hard to believe that the USDA’s proposal will do anything but make a bad situation worse.

The Southern Poverty Law Center has found hundreds of poultry workers unable to perform basic household tasks, such as making their own beds, because of the pain of tendinitis and other musculoskeletal injuries. A recent SPLC survey of 302 current and former poultry workers in Alabama found that 72 percent of the respondents described suffering a significant work-related injury or illness.

This is why the SPLC, Nebraska Appleseed Center for Law in the Public Interest, and other workers’ rights organizations filed a formal petition with the USDA and the Occupational Safety and Health Administration in September urging these agencies to create standards that will protect meat and poultry workers from permanent and crippling injuries.

OSHA must create workplace standards that address the specific injuries suffered by workers as a result of unsafe line speeds.

And if the USDA intends to implement its line-speed increase, the agency must incorporate rules to ensure that workers’ health is not further harmed. Most important, OSHA must vigorously enforce existing safety guidelines.

The men and women feeding our nation deserve better. They are the invisible workers responsible for the food in our supermarkets. We owe it to them to protect their safety.