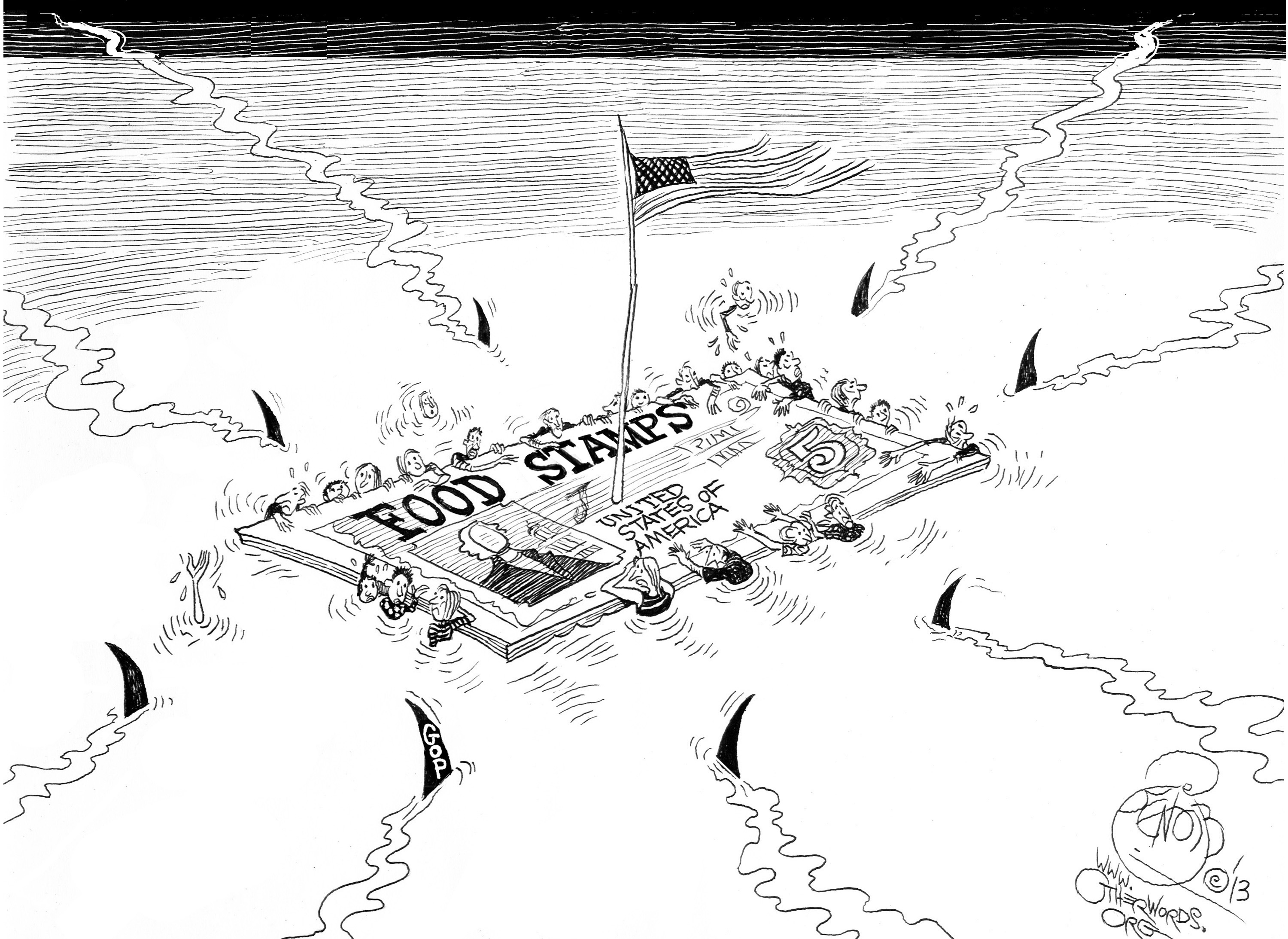 The government should expand the food stamp program, not shrink it.
By Jill Richardson | June 5, 2013

I never paid much attention to the food stamp debate in Congress before. But I’m on food stamps myself these days, so I’m tuning in this time around.

Officially called SNAP — the Supplemental Nutrition Assistance Program — food stamps are one of those things that deficit-conscious lawmakers always want to cut and hunger advocates always want to increase. 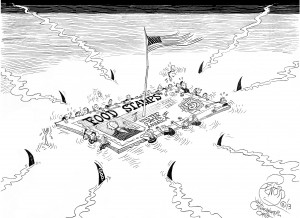 The House wants to slash food-stamp spending by $20 billion. The Senate’s angling for a $4 billion cut, with a twist: David Vitter (the Louisiana Republican who was caught patronizing prostitutes, but somehow hung onto his Senate seat) wants to prohibit “convicted murderers, rapists, and pedophiles” from receiving food stamps for life.

Talk about family values! If this measure becomes law, I can’t wait till it backfires, and somebody robs a grocery store at gunpoint for a box of Cheerios and a carton of milk.

How did I get on food stamps? By being poor. A magazine I wrote for went bankrupt, a book deal fell through, and the next thing I knew, I was broke.

In government-speak, you must earn under 130 percent of the federal poverty line and have less than $100 in liquid assets to qualify. This means most of my income goes to pay my rent, and with the few dollars left over, I struggle to pay for prescription drugs, gas, food, utility bills, and anything else I might need.

Enter food stamps. After providing Uncle Sam with a heap of documentation, I was awarded a whopping $70 per month in assistance. It’s not unheard of for Americans to spend that much at a restaurant for just one meal, but that’s what I get for an entire month. When you’re that poor, it makes a big difference.

SNAP does work as advertised — the program does help hungry people. Yet, I feel its impact as an economic stimulus is even more important.

Every five dollars spent in food stamps generates about nine dollars in economic activity. The money I receive doesn’t only benefit me — it helps the store where I buy staples like oatmeal and beans, and it helps every business that brought those products from the farm to that store: food manufacturers, truckers, warehouses, and more. Those companies make purchases and pay wages. Their employees use their wages to buy what they need, and so on. Economists call this a multiplier effect.

Food stamps are just about the best way to stimulate the economy.

Keeping our population well-fed also makes us more productive. Hungry people can’t work as hard, and hungry children learn less. After the Great Depression, Uncle Sam realized this was even a national security problem when young men who grew up malnourished were unfit to fight in World War II.

Fortunately, I’m back on my feet. I’ll be back to buying my own food all by myself in short order.

Some who receive food stamps are, like me, going through brief tough times. Others are chronically poor. There are 50 million Americans who still don’t get enough to eat with the SNAP budget where it is. That means the government should expand the food-stamp program, not shrink it.

These benefits average $1.46 per meal — hardly enough to purchase healthy food. For my money, I’d rather help people buy healthy food while stimulating economic growth instead of letting them suffer hunger or subsist on junk food. The costs of diet-related illnesses, like diabetes, are many times greater than the cost of healthy food.

But here’s another thought to help understand the larger issue: As long as our economic slump persists, tax revenue will be down while demand for food stamps will be up.

We need to stimulate the economy in ways that put Americans back to work so fewer of us need food stamps. That’s the best way to balance the budget.