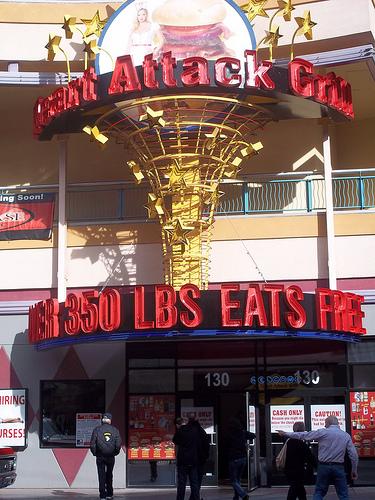 Attention foodies: There’s a new craze in Cuisine World, and it’s going 180 degrees in the opposite direction from the much-publicized healthy-eating movement.

It has nothing to do with dressing locally sourced beets and arugula with artisan balsamic vinegar. We’re talking a big gooey Pizza Hut pepperoni pie with a long looping hot dog stuffed right into the crust around the entire circumference.

Hey, some might see the growing global problem of obesity as a crisis, but YUM! Brands, Inc., the conglomerate that owns Pizza Hut, sees it as a money-making opportunity. 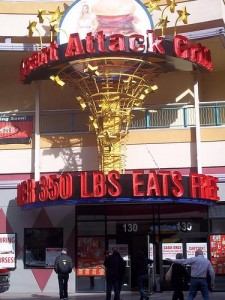 That’s why the worldwide pizza peddler has introduced another belt-buster ringed by a dozen mini cheeseburgers. Sadly, you can only order one if you travel to Dubai, Saudi Arabia, or the other Middle Eastern countries where Pizza Hut operates.

Not to be outdone, Burger King is test-marketing a stunning advance in fusion cuisine at one of its Nashville outlets. It marries two essential food groups together: ice cream and pork. Yes, America, get ready for the Bacon Sundae. It’s topped off with caramel and chocolate syrup.

The pioneering innovator in obesity grub, however, comes from the place where anything goes, and “too much” is never enough: Las Vegas. Many top chefs have opened four-star restaurants along the Las Vegas strip, but none can outstrip a local diner when it comes to extravagant excess. The “Heart Attack Grill” takes pride in deep-fried, and its menu is filled with unhealthy eats. Renowned for its Quadruple Bypass Burger, Butter Fat Shakes, and Flatliner Fries cooked in pure lard, the grill brags that it serves food with “Taste Worth Dying For.”

Indeed, two diners have collapsed so far this year while pounding down Bypass Burgers. To add to the charm, customers weighing over 350 pounds can eat for free.

So dig in, and bon appetite.