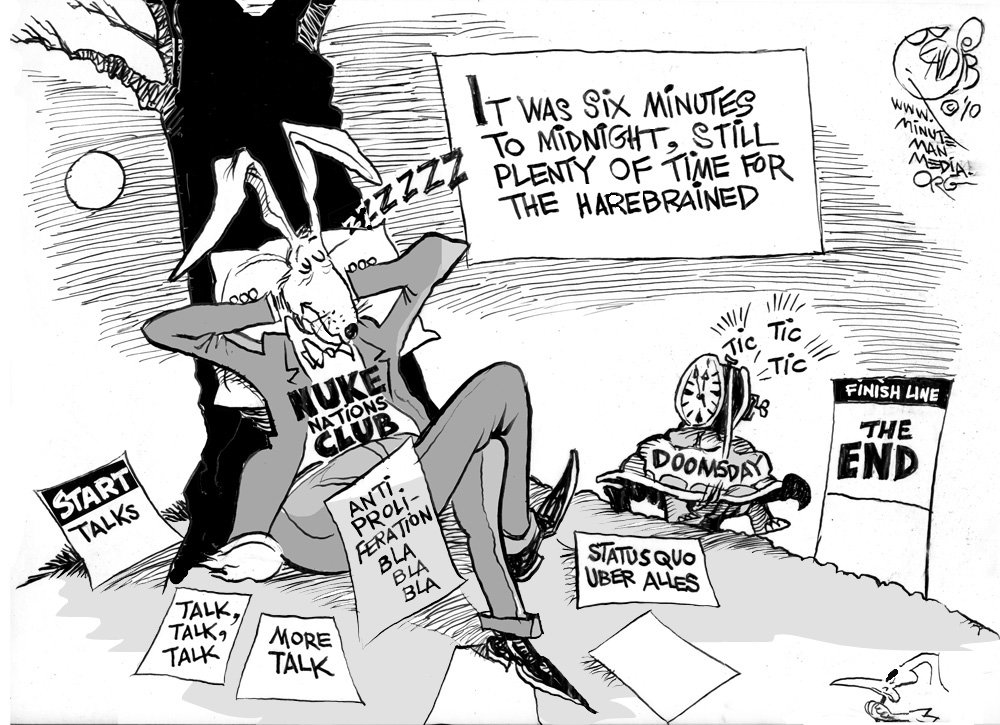 Whether you are reading this article in Tampa or Tucson, Los Angeles or Long Island, one thing is for certain: It’s six minutes to midnight.

While this may not be the normal mode of timekeeping for your dinner plans, it’s true for the “Doomsday Clock,” which figuratively marks the time remaining until the end of the world, due to a nuclear holocaust or an overheated planet. Drawing particular attention to progress made on nuclear weapons issues, a group of prominent scientists—including 19 Nobel laureates—decided on January 14 to move the clock’s minute-hand farther from midnight, from 11:55 p.m. to 11:54 p.m.

What seems like a fleeting amount of time when discussing daily routines is actually quite a significant move for the clock. Created in 1947, its hands have been moved just 19 times in 62 years. 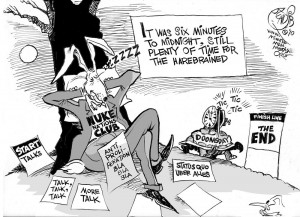 So why the recent move?

In turning back the clock, the scientists recognized the significant progress made in the past year toward reducing the dangers posed by nuclear weapons.

This progress reflects renewed leadership on the part of the United States in raising awareness about nuclear dangers, and fostering the international dialogue and cooperation needed to combat the nuclear threat.

Specifically, this progress includes improved international commitment to the Nuclear Non-Proliferation Treaty, the cornerstone of international efforts to stem the spread of nuclear weapons; discussions with Iran to rein in its nuclear program; the announcement of an international conference of world leaders in Washington, DC in April to discuss nuclear terrorism prevention strategies; growing support for the passage of a treaty to ban nuclear testing; and negotiations between the U.S. and Russia to reduce their still-enormous nuclear weapons stockpiles.

This final step—negotiations to cut Russian and American arsenals—will be critical to advancing the nuclear security agenda.

The United States and Russia are negotiating a new treaty to succeed the landmark 1991 Strategic Arms Reduction Treaty (known as START), which expired on December 5. START signaled the end of the Cold War by reducing the numbers of nuclear weapons the United States and Russia possessed, and providing for important monitoring and verification stipulations to ensure that each side complied with the treaty.

After beginning negotiations in April of last year, President Barack Obama and Russian President Dmitry Medvedev have made tremendous strides towards completing an agreement. Once the treaty is signed, the Senate will need to approve it. Unlike most votes, however, treaty approval requires 67 “yea” votes.

A nuclear reductions treaty would greatly enhance American security. Though the Cold War ended two decades ago, the United States and Russia still possess 95 percent of the 23,000 nuclear weapons remaining in the world. Today, more nuclear weapons mean more opportunities for theft by terrorists or accidents by the hands of those controlling the stockpiles. The same weapons that provided a sense of security during the Cold War are today our gravest security threat.

Despite gains made in the past year, though, almost all the hard work of reducing nuclear dangers has yet to begin. The Iranian and North Korean nuclear programs, the vulnerability of dangerous nuclear materials to theft by terrorists, and the continued risks of an accidental or unauthorized nuclear exchange between existing nuclear nations are stark reminders that the world stands on the edge of a proliferation tipping point.

Twenty-first century threats require innovative and global solutions. Reducing the numbers of nuclear weapons in the world and preventing their further spread will require concerted effort by many nations and sustained leadership from the United States.

Finalizing a treaty to succeed START is an important first step, but it is just that—a first step. 11:54 p.m. is still too late if the world ends at midnight.

Katie Mounts is the director of external relations at the Center for Arms Control and Non-Proliferation. www.armscontrolcenter.org