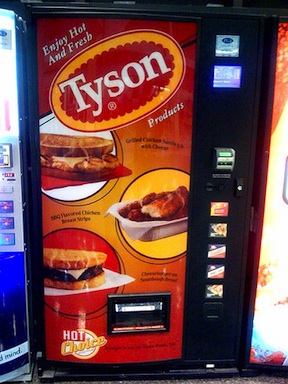 Only four gigantic companies process 80 percent of the beef we eat.
By Wenonah Hauter | May 8, 2013

My new book is called Foodopoly. It’s about the corporate control of every aspect of our food system, from how what we eat is labeled to the pesticides we’re exposed to.

We, the people, must reclaim our democracy. We must reestablish strong antitrust laws to begin the work of fixing our broken, corporate-controlled food system. Our food system should work for consumers and farmers, not big agricultural, processing, retail, and chemical conglomerates.

How has consolidation enabled Monsanto, Tyson, Nestle, Kraft, Cargill, McDonalds and other giant companies to write our food policy, and why is it about to get worse? For starters, consider the Supreme Court’s disastrous decision in the landmark Citizens United case. It allows corporations to spend unlimited sums of money to buy the political system. This practice comes at the expense of citizens and democracy itself.

Foodopoly delves into the history of food and farm policy to explain how the food supply became so consolidated. For example, only four gigantic companies process 80 percent of the beef we eat, and only four retailers sell 50 percent of the groceries. Today, one out of every three dollars spent on groceries in the United States goes to Walmart.

The top 10 fast-food companies control 47 percent of all fast food sales. Together, these industries have commandeered local economies, and now it is clear that the era of family farmers and mom and pop stores has ended. What’s not as clear is the effect this has on our political system.

Make no mistake: When those companies enjoy near monopolies and vast market power — both domestically and globally thanks to crooked free trade agreements — their profits enable them to contribute large sums of money to groups that lobby Washington very effectively.

The food industry spent $40 million lobbying the federal government in 2011, according to the Center for Responsive Politics. And the biotech industry has spent over half a billion dollars in campaign contributions and lobbying expenditures since 1999. Additionally, special interests spent $173.5 million lobbying on the 2008 Farm Bill.

Food & Water Watch, the non-profit organization I run, tries to fight back against the corporate control of our food system. Our organizational budget is about $12 million a year.

This summer, President Barack Obama will attempt to fast-track two trade deals — the Trans-Pacific Partnership and the Transatlantic Free Trade Agreement. Both favor the interests of corporations and their financers over consumers.

These trade deals would increase export-oriented natural gas fracking, boost our food imports, undermine yet more domestic laws, and increase the corporate control of our natural resources. They will forever enshrine the very economic system that has led to an ever greater imbalance in income and wealth and increasingly frequent economic crises.

The changes needed to reform our food system and strengthen our democracy can only happen when the people demand better leadership. We need to address the political reasons our food system is so broken.

And we can’t just shop our way out of this problem.

Wenonah Hauter is the executive director of Food & Water Watch and author of Foodopoly: The Future of Food and Farming in America. Foodopoly.org
An earlier version of this article originally appeared at TripleCrisis.com.
Distributed via OtherWords (OtherWords.org)