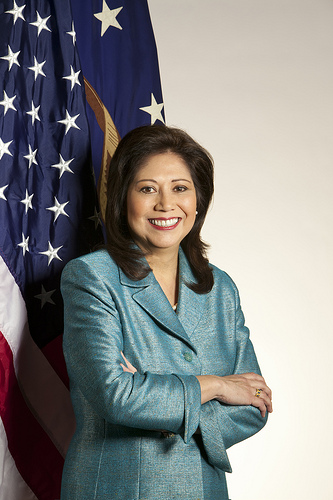 Obama's first labor secretary has been a watchdog for workers.
By Sarita Gupta | January 16, 2013

As President Barack Obama’s second term begins, change is coming. Change to his cabinet, that is.

Secretary of Labor Hilda Solis is the latest of the administration’s leaders to announce her resignation. Obama’s cabinet was already becoming more male and pale. With Solis, the first Latina to hold a cabinet-level post, stepping down, the White House risks losing even more diversity.

She will be hard to replace in many ways. Solis made her mark by ensuring the voices of working people were heard at the Department of Labor. The daughter of immigrant, blue-collar, union workers, Solis has been a watchdog for American workers — recovering stolen wages, investigating unsafe workplaces, and pressing hard for programs that shored up our workforce in the Great Recession.

It was Solis who strengthened the Department of Labor’s enforcement of wage and hour violations, through which over 300,000 workers recovered approximately $280 million in unpaid wages and overtime. It was Solis who aggressively enforced workplace safety regulations. It was Solis who secured critical relief and protections for immigrant workers who risked speaking out against abusive conditions on the job. And it was Solis who oversaw economic recovery projects, including programs to retrain 1.7 million workers with new job skills and administer unemployment benefits, a vital safety net for millions of workers struggling to get by. 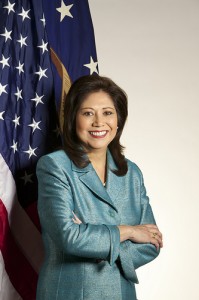 Solis has been key to making invisible work visible again at the Department of Labor by bringing the perspective and values of workers to policymaking. She understood that the problems her mother had as a nanny are many of the same problems facing domestic workers today. That’s one of the many reasons why she initiated a rule change that would include 1.8 million home care workers in wage and overtime protections. And while this long-overdue rule is still pending, the next Secretary of Labor should enact it and implement it robustly.

It’s unbelievable that the people who we rely on to care for our loved ones are not required to receive a minimum wage or overtime pay. When Congress expanded minimum wage requirements and overtime protections to “domestic service” workers in 1974, certain types of care workers — elder care aides, live-in nannies and home health workers — were explicitly excluded. Since then, the home health sector has grown exponentially, but these regulations haven’t changed.

Today in this country, someone turns 65 every eight seconds. This year alone, approximately 4 million Americans will become senior citizens, marking the beginning of an unprecedented aging wave that will place an incredible strain on our already struggling health care system. To keep up with our aging population, studies suggest we must create 1.6 million new care jobs by 2020. Our current and future caregivers deserve to have their jobs protected by our nation’s labor laws.

Looking back, Secretary Solis’s tenure was filled with unprecedented victories for workers and working families. The next Secretary of Labor must continue on her path by ensuring our economic policies and regulations work for working people. The next labor chief should put workers ahead of big business interests and bring worker organizations and unions to the policy table alongside employers.

Sarita Gupta is the executive director Jobs with Justice and the co-director of Caring Across Generations, a campaign for quality care and support, and a dignified quality of life for all Americans, across generations. CaringAcrossGenerations.org
Distributed via OtherWords (OtherWords.org)